Is all well now between Raymart Santiago and his daughter Sabina?

On June 21, Thursday, Raymart greeted his daughter a happy 14th birthday and shared a picture of them both all smiles.

It’s previously been unclear what their relationship has been like after Sabina openly railed against her father last March, for allegedly having a girlfriend. During her grade school graduation last May, Raymart was nowhere in pictures; instead, godfather Piolo Pascual had attended the ceremony.

For Father’s Day last June 17, Sabina greeted mom Claudine Barretto on her Instagram Stories. “My mom is my mom and dad,” she said.

However, it seems that for her birthday, dad Raymart has tried to reconcile with his teen daughter. Estrella “Inday” Barretto, Claudine’s mother, hinted that Raymart spent time with his children for Sabina’s birthday.

“Happy birthday Sabina, for I am happy that your Dad was with you on this Special day and that he and Santino did a movie date,” she commented on Raymart’s picture.

She also had a message for Raymart: “Let not any Animosity And Rude Intervention from Meddling family member Ever Break the Bond of Parenthood… Dad and I still always Treat you Raymart with Respect and Fondness.” 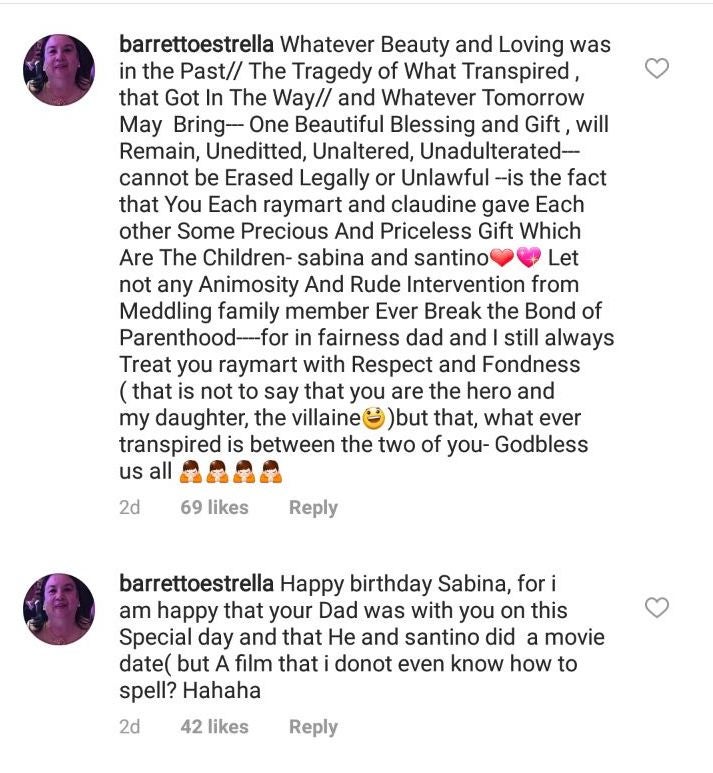 Last March, Claudine came to her daughter’s defense after she lashed out at her father on social media. She claimed that Raymart would at times visit only once every few months, and that even as she urged him to tell his children about his girlfriend, he has refused to do so.

Claudine and Raymart had a civil wedding in 2004. In 2013, news broke that Raymart had left their conjugal home. In a counter affidavit, the actor claimed that his wife had been violent against him. The former couple has yet to have their marriage annulled. JB

Is Sabina hitting at dad Raymart Santiago and his alleged girlfriend?