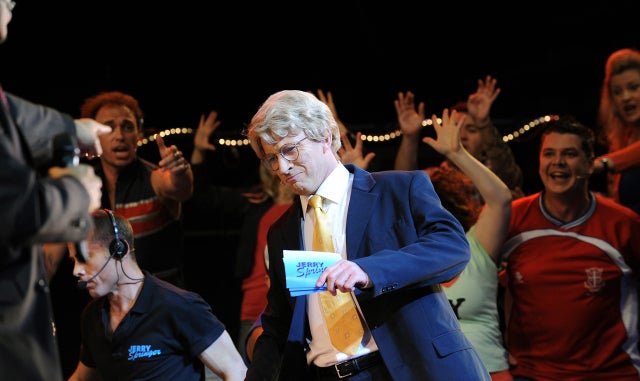 David Wenham performs the role of “Jerry Springer” during a rehearsal for “Jerry Springer The Opera” at the Sydney Opera House on April 21, 2009. Image: GREG WOOD / AFP

“The Jerry Springer Show”, which became a symbol of low brow television with its on-air fights, swearing and infidelity revelations, is set to end after a 27-year-run, a spokesperson said Thursday.

The show is being bought from NBC Universal by CW, the joint enterprise between CBS and Warner Bros, which intends to show re-runs but has no plans to commission new episodes.

Launched in 1991, “The Jerry Springer Show” began life as an ordinary talk show focusing on social issues and US politics, led by the-then mild-mannered lawyer and former politician Springer, who briefly served as the mayor of Cincinnati in 1977.

But in an effort to boost ratings, the son of Jewish German immigrants switched things up dramatically after a few years, focusing on salacious and outrageous content.

In most episodes, guests came to talk about family problems and expose adultery and other transgressions.

Springer would try hard to mediate but the encounters often ended up in fisticuffs, with guests being held back by security guards.

In the late 1990s, the show topped the daytime television ratings in the US, beating out even Oprah.

In this decade, the show has drawn less attention but will still be seen in most of America. NVG

NatGeo celebrates glory of the ‘90s with new documentary series