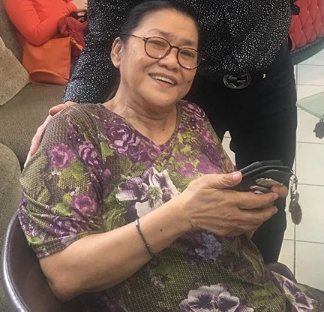 But just as many raised brows on the incident, not all was angered by the act, one of them is veteran talent manager Lolit Solis who said she would not mind if the President kisses her.

In this light, Solis was asked by Inquirer Bandera columnist Jun Nardo if she would be willing to exchange a kiss with the President.

(Why not? He’s the president. I would even be proud of it. [laughs] You want it now?)

The word war between Aquino and Uson was the talk of the town for days now. Uson, in her usual fiery defense, made an analogy supposedly comparing the President’s kiss with that of the late Martial Law martyr Sen. Benigno “Ninoy” Aquino Jr. when the latter was kissed on the cheeks by two women minutes upon his arrival in the Philippines on that fateful day of August 21, 1983.

The videos were supposed to show that while people were raving at the President’s kiss, a similar situation also happened decades back to another Philippine leader.

Immediately, Aquino exploded on social media and slammed Uson for “crossing the line.” The Queen of All Media fumed because the comparison happened between a living person and a deceased one. She also pointed out that the choice of the video was just too slapping for her as a daughter because the specific clip was taken minutes before her father was shot dead on the tarmac.

The highlight of her wrath was an open declaration of war on Uson whom she challenged to a debate. She also offered herself as a willing target if Uson really wants a punching bag for her tirades so the former sexy star could spare her parents who could no longer defend themselves.

Duterte himself and Special Assistant to the President Bong Go have already relayed their apologies to Aquino. Uson however, stood her ground and “declined to apologize” for what she says is the “truth.”    /muf