Cate Blanchett on ‘Ocean’s 8’: I have hit the jackpot 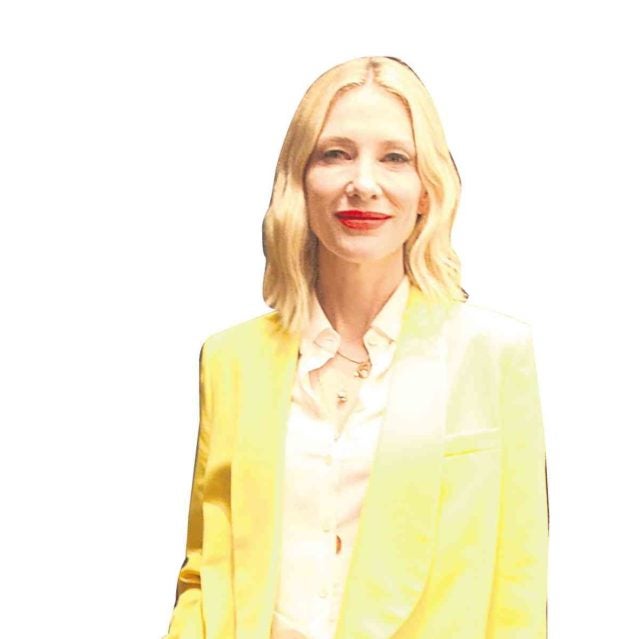 LOS ANGELES—Cate Blanchett, striking in a bright yellow pantsuit, gold heels and the reddest lipstick, walked into a hotel meeting room in Manhattan looking like she owned the world.

“No, I think Viacom and Google own the world,” she quipped.

The Aussie, who recently headed the Cannes Film Festival jury, is one of the few actresses in contemporary cinema who evokes true glamour and the magnetism of the stars of Hollywood’s golden age.

Asked how she does it—consistently among the stunners on the red carpet—Cate cracks, “Oh it’s easy. I wake up and look like that. No hair and makeup people. I do it all myself (laughs). What is great is that I have had a long creative relationship with a lot of designers, Mr. Armani being one of them. When I got my first check from my very first job, I bought an on-sale Armani suit which I still have.”

But this afternoon, the Time’s Up cofounder was wearing Stella McCartney. “What I really wanted to do in Cannes was wear all-female designers. It’s great to wear young, emerging female designers when you have that platform. Being a woman who has a brain doesn’t necessarily mean you don’t like dressing up. I do it for a living (laughs).”

In “Ocean’s 8,” Cate and Sandra Bullock play Lou and Debbie, respectively—who are partners in crime pulling off an elaborate heist at New York’s fabulous Met Gala.

The goal is a $150-million Cartier necklace worn by an actress, Daphne Kluger (Anne Hathaway). Also in the cast are Helena Bonham Carter, Mindy Kaling, Sarah Paulson, Awkwafina and Rihanna.

Cate and her husband, playwright and screenwriter Andrew Upton, their three biological sons and one adopted daughter live in the UK.

Would you make a good thief? If you could steal anything, what would it be? Oh gosh. Awkwafina or Nora (Lum) said this funny thing, “I am going to steal the narrative!” So I am with her. I would make a terrible thief. I have such guilt and shame about so much stuff. But my thing is that I go to the supermarket and that is when I want to start stealing stuff—apples, oranges, chocolate bars, cocoa powder, Altoids and little things like that.

If someone gave you a $150-million Cartier necklace, what would you do with it? I would cut it up and divide it between the have-nots in this world.

This movie shows the friendship between these women. Did you know most of your costars before this movie? How did you make the less experienced actors feel confident? Everyone felt like they were at the top of their game. Nora has such incredible energy, as does Rihanna even though they may have necessarily not made as many movies. Mindy is an extraordinary writer and problem solver and an amazing listener. I have met Sandy (Sandra Bullock) and Annie (Anne Hathaway) before. I worked with Sarah before.

Everyone else was new. So there was a sense of everyone sniffing each other out, which happens in the film. But it really only took a couple of days and then we were starting to get into the rhythm. 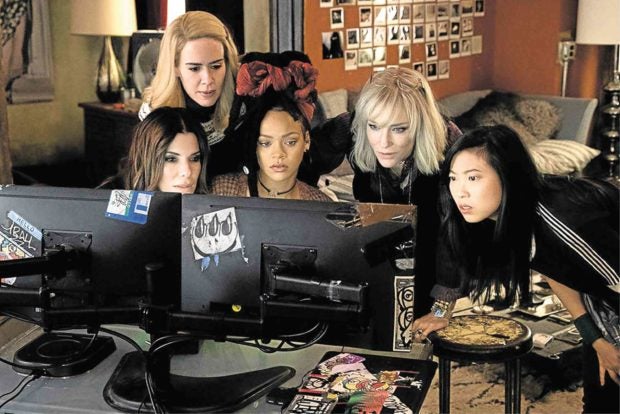 What was it like working with Rihanna? She is one of the most fluid, easy, relaxed and natural performers that I have ever seen. And those eyes. You just look at her and your jaw would drop.

When did you feel like you hit the jackpot in your professional life? I remember when I was cast years ago in a play right out of drama school called “Oleanna” by David Mamet, opposite Geoffrey Rush at the Sydney Theatre Company. I wept when I got the job. I thought it doesn’t get any better than this and it’s going to be all downhill from here.

Early on in my career, I took on roles that actresses turned down because they were girlfriend roles. I tried to subvert that cliché and find something fresh in them, so I try to make an opportunity out of whatever.

But yeah, I feel, particularly with this film, look at them (looks at the all-women cast in the poster beside her), that’s a f***ing jackpot right there (laughs). That doesn’t happen often and it’s rare.

We made the film awhile back. And even in the last 18 months, two years, the landscape has changed enormously. It still felt like an anomaly. There are so many female-centric films being made, on development slates at the moment, that I think there is going to be an explosion.

We had a fan screening and we popped in and it was a really diverse mix in the audience. There were men and women of all ages, shapes, sizes and nationalities. This is not a niche film. It’s a great, funny, entertaining tentpole movie. So I feel like I have hit the jackpot.

And when did you hit the jackpot, personally? Meeting my husband (Andrew Upton). And, as a result, my family.

How did the addition of a girl change the family dynamics? How did your three boys adjust to having a sister? I wasn’t a girl who grew up thinking I would love to have kids. But then, I met my husband and we had a child. We talked about adopting after our first child. Then we had another child and talked about adopting again (laughs).

So it wasn’t about having a little girl. When we adopted, we felt like we had space in our lives. I am so proud of my three boys for the way they have welcomed her into their lives. She is wise beyond her years but she is only 3 years old.

You have been at the forefront of the Time’s Up movement. What are your hopes in how this movement will change Hollywood? There is no forefront to this movement. It’s a nonhierarchal inclusive movement that is rolling like a massive rolling stone, bigger than any of the individuals involved. I am in a very public industry, and when one stands up and says anything outside one’s lane, outside the lane of what you are wearing, you are open to criticism.

I feel that it’s upon us to make the seismic changes we need to make in our industry. So that those changes can happen in other, less visible industries. Because there is not an industry I can think of where there is equal pay for equal work, or where abuse as a power doesn’t exist, for men and for women. So equality is not a political issue—it’s a human issue.

How much did you enjoy being the president of the Cannes Film Festival jury? It was one of the great privileges of my life. It was one of the happiest and most fascinating experiences I have ever had. It was a privilege and a huge responsibility, but it’s a democratic process. When you are in a great position of leadership, one of the strongest skills you can have is to listen.