‘Solo’ shows off young Chewie, from a veteran Wookiee actor 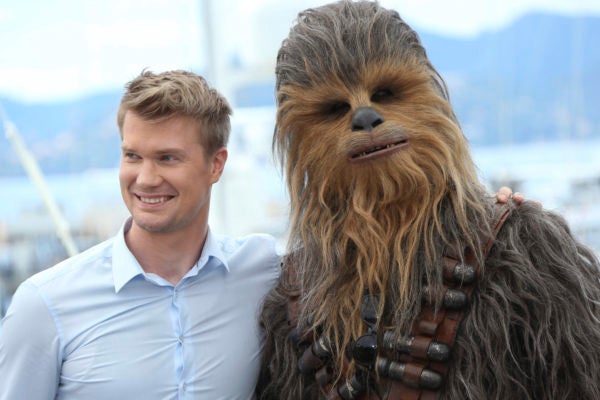 In this May 15, 2018 file photo, Finnish actor Joonas Suotamo, left, poses with a person wearing a Chewbacca costume during a photo call for the film “Solo: A Star Wars Story” at the 71st international film festival, Cannes, southern France. The film releases nationwide on Friday, May 25. Image: Invision/Joel C. Ryan via AP

“It was actually a long time before Alden saw me in that very traditional Chewbacca (look). Because when we meet, Chewie doesn’t really look like the Chewie that you’ve known and expect. It took a while,” Suotamo said.

Suotamo was actually among the veteran “Star Wars” cast members on the “Solo” set — he first appeared as the famed Wookiee in “Star Wars: The Force Awakens”. He plays him as a relatively young 190 years old in “Solo”. The film, out Friday, stars Donald Glover, Emilia Clarke, Thandie Newton, Woody Harrelson, Phoebe Waller-Bridge and Paul Bettany in their first “Star Wars” roles.

At the film’s international premiere at the Cannes Film Festival last week, Suotamo was clearly enjoying himself, snapping selfies with a person in a Chewbacca costume and beaming in photos shot with castmates atop the festival’s iconic red stairs.

“I think Peter’s outlook to that has always been to live your own life — not be bothered and not think too much about what others are thinking. That’s a great thing,” he said. “He has done so much good for ‘Star Wars’ by being dedicated his life to this franchise and these stories. We are indebted to him as much as anyone.”

He also got some unexpected attention from director Ron Howard, who could empathize with Suotamo’s limitations while in costume.

“When he was shooting ‘Grinch’ with Jim Carrey, for one day he dressed in a Grinch costume and directed the film,” Suotamo said. “I think he did that just to know what it feels like to be in a suit. So he was very aware of my limitations and what I was going for every day when I was in the suit.” CC