‘Bourne’ here because ‘you know how to make movies’ 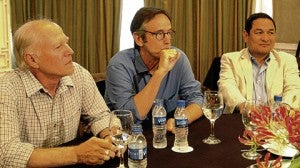 Manila was chosen as one of the locations for Tony Gilroy’s spy-thriller, “The Bourne Legacy,” because the producers wanted to take advantage of its “efficient film infrastructure.”

And, no, actor Matt Damon, who stared in the first three movies of the franchise, will not have a cameo role in the coming feature.

This was according to US film producer Pat Crowley who, along with coproducer Frank Marshall, sat down with entertainment writers at the Mandarin Oriental Manila in Makati City on Tuesday afternoon.

“People here know how to make movies,” Crowley told Inquirer. “In the other cities previously considered (Jakarta and Ho Chi Minh), we would have had to start from scratch.”

Crowley, who produced the first three “Bourne” films, added: “We’re also very impressed with what we found here, visually. Tony wanted an exotic place that people don’t know much about but would like to.”

The producer said they were primarily looking for “a place close to the water. We also needed a place where (the characters in the movie) could hide. We needed to shoot at an airport. We wanted to do a scene in a covered vegetable market. Jun Juban had a list and he took us to various places.”

Marshall, whose credits include “Raiders of the Lost Ark,” “The Sixth Sense” and “The Curious Case of Benjamin Button,” said: “Tony knew beforehand what he wanted. The sports arena (in San Andres, Malate) was fantastic for us. It became our base. It’s not just about a place having the right look; it also has to be production-friendly.

Filming, mostly on Leveriza Street and the San Andres Public Market, began on Jan. 11. The crew is currently shooting on J. Bocobo Street and Remedios Circle, also in Malate. Scenes at the Marikina fish port is scheduled for the end of the month.

Juban said he has not received any complaints from the crew. “I guess they saw that Filipinos were very cooperative. People kept quiet and stayed put when told to,” he said. “Our second-unit director said that during the filming of ‘Mission Impossible 4’ in India, the production team had trouble with crowd control. They had to wait until 3 or 4 a.m. to shoot.”

One-fourth of the movie

Marshall added: “It’s quite the opposite. We have locations that are hard to work in, both for us and for the people who live there. To have 250 people come to your neighborhood for seven to 10 days is disruptive. But everybody has been so cooperative, helpful, and generous. I can’t say that about other locations we’ve been to.”

He said 25 percent of the film will be shot in the Philippines (earlier reports said only the final 25 minutes). Some parts will be filmed in El Nido, Palawan. “We can’t tell you what these scenes are… only that the place, which is gorgeous, will have a special part in the movie. It’s one of the most stunning places we’ve seen anywhere.”

Juban reported that “a drive-by scene— at night, using a helicopter,” will be shot in Makati City. “We’re still trying to get a special permit for that.”

“Bourne Legacy” will feature a new protagonist, Aaron Cross (played by Jeremy Renner, Academy-Award nominee for “The Hurt Locker”), who like Bourne, is a covert agent trained to become an assassin.

“We’re telling a different story,” Marshall explained. “Bourne is still out there. Cross is in the same world as Bourne’s but… there’s not just one agent, there are a lot of them doing different things. Damon will not be doing a cameo — that I can say for sure.”

Crowley said scouting for local talents was made easy with the help of Filipino casting supervisor Julie Ysla. “We gave Julie the list of characters we were interested in. She videotaped auditions, took some head shots and sent the materials to us. The process took several weeks. Then we got to meet some of the veteran actors here…”

In one audition, Crowley said he met a “great actor” that he had to turn down. “He was not right for the role. You’re always looking for that distinct feature.”

So far, three theater actors— Lou Veloso, John Arcilla and Madeleine Nicolas— have been tapped to play a fisherman, a security guard and a hotel employee, respectively.

“The Bourne Legacy,” a Universal Pictures production, will premiere in the United States on Aug. 3. A special red-carpet screening in Manila is scheduled in September, Marshall said, adding: “Manila deserves it, though we’re not sure if the actors will be here since we’ll be promoting in Europe at the same time.”