I didn’t get to watch the “Happy Yipee Yehey” episode when one of its cohosts, Rico J. Puno, reacted unfavorably to my column where I wrote that the show is folding up soon. Well-meaning friends just told me about it. According to them, Rico J said, “Huwag mong pangunahan ang network.”

But news is news. And as long as you get your facts straight, it’s not a crime to write about something ahead of the rest. There’s no such thing as wrong timing if your story is right.

Having been in the biz for so long, Rico must know by now that TV shows come and go. Maybe he is still in denial. Instead of giving a message to Rico, let me paraphrase his signature song, “Kapalaran.”

Instead of harping on the end of “HYY,” maybe Rico should focus his attention on his love child with a younger singer who’s craving his love and affection. Shows are temporary, children are forever.

It was such a thrill to meet David Archuleta of “American Idol” fame. I visited the set of “Nandito Ako,” his dramaserye with TV5, on its first taping day. As soon as we were introduced, he hummed “Hello Dolly” and said it’s one of his favorite songs.

I got to listen to his version of “Nandito Ako.” I was pleasantly surprised that he sang it in almost perfect Pinoy diction. He is also set to record its English version, “Forever With You” (as translated by the song’s composer, Aaron Paul).

He’s a fan of Regine Velasquez, so there are plans for him to meet her and Ogie Alcasid as well. I’m sure Ogie will like David’s version of his hit song, “Nandito Ako.”

Direk Mac Alejandre said David is such a delight to work with. “He knows what’s expected of him. And he’s a perfectionist. Siya mismo ang gustong umulit ng eksena if he feels he can do more. If only he could stay here longer, it would be great to do a movie with him. For a first-time actor, he’s a natural.”

The Archuleta fever has spread across Asia. Fans from neighboring countries are even flying in to watch his tapings. David’s fans from all over Asia will be included in the concert scene of his teleserye (Visit followarchuleta.ph and follow [email protected]).

He took time out from his hectic schedule to attend a Mormon service last Sunday. After his three-week stay here, he is off to Singapore, before going on a two-year hiatus to fulfill his religious mission.

While shooting, David is not comfy when there are too many people around because it distracts him. There were five bodyguards assigned to keep an eye on him, but he requested to trim it down to three.

He is allowed to work only for 12 hours a day, and he has to rest for the next 12 hours before he resumes work (in compliance with the rules of the Actors Guild, of which he is a member).

Be that as it may, David is surely turning into a Goliath in the hearts of Pinoys. 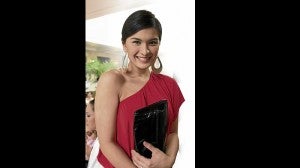 Pauleen Luna has deactivated her Twitter account. Could it be her way of evading queries and tirades about her and Vic Sotto, even as she and Bossing are mum about their rumored romance?

Who was Oyo Boy Sotto alluding to with his tweet, “Maraming mukhang pera diyan”? Tweet and sour!

PERSONAL: Daghang salamat to my ever dependable friend in Cebu, Albert Ceniza, for his kind assistance over and beyond the call of friendship.