Israel's Netta, the voice of #MeToo at Eurovision | Inquirer Entertainment 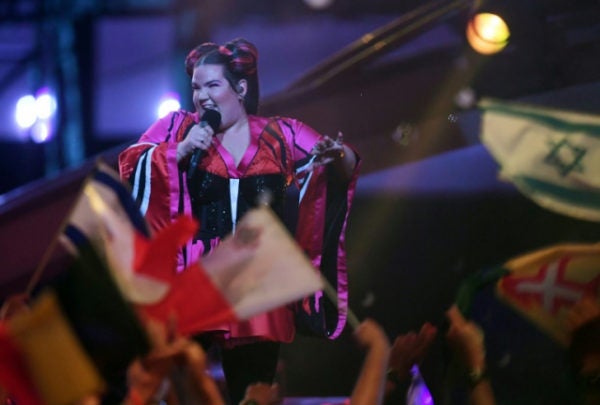 Netta Barzilai is popular among young people in Israel after winning a reality show there earlier this year, giving her the right to represent the country at Eurovision. Image: AFP/Francisco Leong

With her powerful voice and attention-grabbing clothes, Israeli singer Netta Barzilai has become the voice of the #MeToo movement at Saturday’s Eurovision Song Contest in Lisbon.

Her uptempo song “Toy” — which include the lines “I am not your toy, you stupid boy” and “the Barbie’s got something to say” — has grabbed the limelight, summing up the concerns of many women who have adopted the movement.

“The song has an important message — the awakening of female power and social justice, wrapped in a colorful, happy vibe,” Barzilai was quoted as saying by Eurovision site wiwibloggs earlier this week.

“I think the song is #MeToo, but it’s an empowerment song for everybody, and everybody can find themselves in it,” she told OUTtv, a Netherlands-based speciality cable channel.

The song also references “Wonder Woman”, who was recently brought to the big screen by Israeli actress Gal Gadot.

“This song needed to make everyone dance, with a happy beat” but also “say something different about the #MeToo movement”, the author of the song, Doron Medalie, said in an interview with The Times of Israel.

Barzilai is the fans’ favourite at the contest, according to a poll carried out by OGEA, a network of Eurovision song contest fan clubs from around the globe.

At Tuesday’s first semi-final at Lisbon’s riverside Altice Arena, many of her supporters wore T-shirts that read: “I am not your toy”. Barzilai was one of the ten acts that made it through to Saturday’s final.

She says her fashion choices — at the semi-final she wore a multi-colored kimono while at Sunday’s opening ceremony she was decked out in a white chiffon dress that resembled a bridal gown — are part of her message.

“I see it as a really important way of expression. Also because larger women don’t celebrate themselves,” she told a news conference after a rehearsal in Lisbon last week.

“We only live once and I really believe [that] I am beautiful and sexy and special… it’s a wonderful chance to do a little change in the world.”

Barzilai is popular among young people in Israel after winning a reality show there earlier this year, giving her the right to represent the country at Eurovision.

Born in 1993, Barzilai was raised along with her two brothers in the Tel Aviv region. While still a child her parents moved to Nigeria where she lived for four years, learning rhythms of African lullabies sung to her by local nannies.

Back in Israel, she studied jazz at the Rimon School of Music, one of the most prestigious music schools in the country.

“I find her very talented, she has a very beautiful voice and she performs well on the stage,” said Naomi Yeivin, a 24-year-old Israeli singer and songwriter, who studied at the same music school.

She said many people focused on Netta’s weight and said it was good that she did not feel inhibited by it.

“I also find it good, but I don’t think it will completely revolutionize mentalities,” she told AFP in Israel.

For months Barzilai has been the bookmakers’ favorite to win Eurovision this year.

But after Tuesday’s semi-final she was overtaken by Cyprus’ Eleni Foureira with a catchy pop song entitled “Fuego”. CC

#MeToo not just a movement, but also evidence in discrimination claims