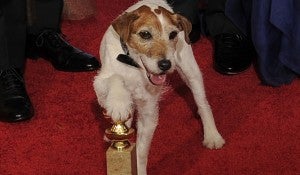 TOP DOG Uggie the dog featured in “The Artist” puts his paw on the best comedy trophy. AP

BEVERLY HILLS, California—“Right now, if I were to write a song, it would be a tap dance number,” French composer Ludovic Bource said as he accepted the best original score Golden Globe for “The Artist.”

The black-and-white silent film led the Globes, awarded by the Hollywood Foreign Press Association (HFPA), with three wins on Sunday night (Monday in Manila) at a show that spread Hollywood’s love around among a broad range of films.

Two other wins for “The Artist” were best musical or comedy and best actor in a musical or comedy for French star Jean Dujardin. Best drama trophy went to “The Descendants” and, to its lead star George Clooney, the dramatic actor award. Other acting winners were Meryl Streep, Michelle Williams, Christopher Plummer, and Octavia Spencer. Martin Scorsese was named best director.

Streep thanked “everybody in England that let me come and trample over their history.” This is her eighth Globe, as dramatic actress for playing former British Prime Minister Margaret Thatcher. British stars and productions played a prominent role all night.

Something of a dud

Comedian Ricky Gervais, who ruffled feathers in past shows with sharp wisecracks aimed at Hollywood’s elite and the Globes itself, returned as host for the third straight year.

But the traditionally fun stellar party, considered the official start of the annual Hollywood awards season, turned out to be something of a dud—much like a tightly choreographed, well-behaved awards show.

Husband-and-wife presenters Felicity Huffman and William H. Macy sang a comic little ditty before announcing their winner. Still, it was just a startling departure from the pro forma style that governed the proceedings.

Maybe the evening’s highlight: Best dramatic actress winner Meryl Streep (“The Iron Lady”) erupted with a bleeped s-word as she realized she had left her glasses at her table and would have to rely on memory for her acceptance remarks (she struggled awkwardly).

Mostly, the show was on automatic pilot. Glamorous presenters announced winners who received their awards graciously—then on to the next category.

Kate Winslet won for her acting in “Mildred Pierce,” playing a strong-willed divorcee in Depression-era California in the remake of the Joan Crawford classic. Idris Elba, as the detective John Luther in BBC America’s “Luther,” won for best actor in a TV movie or miniseries. ITV’s “Downton Abbey” won for best TV miniseries or movie.

Williams won for actress in a musical or comedy as Marilyn Monroe in “My Week With Marilyn,” 52 years after Monroe’s win for the same prize at the Globes for “Some Like It Hot.”    Williams joked that her young daughter put up with bedtime stories for six months spoken in Monroe’s voice.

The supporting acting Globes went to Plummer as an elderly widower who comes out as gay in the father-son drama “Beginners” and Spencer as a brassy housekeeper joining other black maids to share stories about life with their white employers in the 1960s Deep South tale, “The Help.”

Scorsese won for the Paris adventure “Hugo.” It was the third directing Globe in the last 10 years for Scorsese, who previously won for “Gangs of New York” and “The Departed” and received the show’s Cecil B. DeMille Award for lifetime achievement two years ago. He won over a field of contenders that included French director Michel Hazanavicius, who had been considered by many in Hollywood as a favorite for “The Artist.”

Dujardin became the first star in a silent film to earn a major Hollywood prize since the early days of film. He won as a silent-era star whose career unravels amid the rise of talking pictures in the late 1920s.

It’s a breakout role in Hollywood for Dujardin, previously little known to US audiences. His French credits include “The Artist” creator Hazanavicius’ spy spoofs “OSS 117: Cairo, Nest of Spies” and “OSS 117: Lost in Rio.”

The Globes’ dual best picture prizes could set up a showdown between “The Artist” and “The Descendants” for the top honor at next month’s Academy Awards.

The last time the winner for best musical or comedy at the Globes went on to claim best picture at the Oscars was nine years ago with “Chicago.” And the only time silent films have won best picture or acting Oscars was in the Academy Awards’ first year, for 1927-28, 16 years before the Golden Globes even started.

This year it is believed that “The Artist” and Dujardin—both have been charming audiences since it premiered last May at the Cannes Film Festival—have enough critical mass to compete at the Oscars with dramatic counterparts such as “The Descendants” and Clooney.

Directed by Alexander Payne (“Sideways”), “The Descendants” is adapted from Kaui Hart Hemmings’ novel, “The Descendants” and casts Clooney as Matt King, scion of an aristocratic Hawaiian clan and a neglectful dad forced to hold together his two daughters after his wife falls into a coma from a boating accident.

“The Artist,” which led the Globes with six nominations, also won the musical score prize for composer Ludovic Bource. Among its losses was for screenplay, a prize that went to Woody Allen for his romantic fantasy, “Midnight in Paris,” the filmmaker’s biggest hit in decades. Never a fan of movie awards, Allen was a no-show at the Globes.

Steven Spielberg’s “The Adventures of Tintin,” based on a series of Belgian picture books begun 80 years ago, won best animated film. The Iranian tale, “A Separation,” was named foreign language winner.

Kelsey Grammer won for best actor in a TV drama for playing a powerful Chicago mayor on Starz’s “Boss.”

Gervais started the show with some slams at the Globes:  “Just like the Oscars, but without all that esteem. The Globes are to the Oscars what Kim Kardashian is to Kate Middleton—a bit louder, a bit trashier, a bit drunker and more easily bought. Allegedly. Nothing’s been proved.”

Mostly, though, he played it safe. Aired on NBC, the Globescast wasn’t trashy or drunken, even if Gervais always had what appeared to be a glass of beer within reach. It was, to many observers, three hours of sleek monotony.

“Nervous? Don’t be,” the host said, grinning at the room full of glitterati at the top of the show. “Tonight you get Britain’s biggest comedian, hosting the world’s second-biggest awards show, on America’s third-biggest network.” He corrected himself: “Its fourth.”

The barbs fell short of the standard for which Gervais is known, though, and came nowhere close to last year’s acerbic tone that had everyone debating: Had he crossed the line or just broken new ground?

After last year’s shindig, when Gervais insulted nearly everyone in sight, including the president of the Hollywood Foreign Press Association (“I just had to help him off the toilet and pop his teeth in”), an invitation back for the British wag seemed doubtful.

But the Globes apparently loves to court outrageous behavior. That meant another turn for Gervais. In fact, he explained in his monologue, the HFPA had warned him that were he to insult anyone on hand, or “offend any viewers, or cause any controversy whatsoever—they’ll definitely invite me back next year, as well.”

Then Gervais went on to praise “Boardwalk Empire,” a nominated HBO series: “I love that show. It’s about a load of immigrants who came to America about a hundred years ago, and they got involved in bribery and corruption and worked their way up into high society. But enough about the Hollywood Foreign Press.”

He later needled early winners, saying the show was running long and stars needed to keep their speeches short: “You don’t need to thank everyone you’ve ever met or members of your family, who have done nothing. Just the main two—your agent and God.”

And he didn’t pass up the chance to make gratuitous fun of the title of Jodie Foster’s 2011 film, “The Beaver.” In the audience, Foster seemed amused.

Unlike last year, few took Gervais’ bait. One was Madonna, whom he introduced as “just like a virgin,” plus an eruption of theatrical coughs.

Madonna fired back: “If I’m still just like a virgin, Ricky, then why don’t you come over here and do something about it? I haven’t kissed a girl in a few years…”

A camera caught Gervais comically dashing off stage. When Gervais dropped an f-bomb, the censors were ready.

A few minutes later, Gervais boasted, “It’s so good having a job where you can get drunk and say what you want, and they still pay you.”

But maybe he wasn’t drunk enough, or on the air enough, to keep the Globes lively. It seemed he was mostly drinking alone.