And now, Filipinas in ‘Bourne Legacy’ 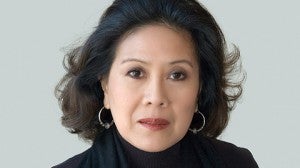 MADELEINE NICOLAS: Among several Pinays chosen to do bit roles in “Bourne Legacy,” which is being filmed in the Philippines. PHOTO TAKEN FROM MODELMAYHEM.COM

Apart from acclaimed stage and film thespians John Arcilla and Lou Veloso, other Filipino actors have been tapped for short roles in Tony Gilroy’s “The Bourne Legacy,” currently shooting in the country.

Movie fans may not be familiar with their names, but these three Pinays have built a formidable filmography consisting of local and foreign productions.

Cuntapay, who also works as a talent coordinator, told the

Inquirer that she did her best during the auditions. “I was interviewed by the director and the producer. They were nice.”

Nicolas recounted in an earlier interview that she didn’t expect to reach the final round of tryouts. “I came prepared for the callback. I wore the required costume and brought props—I was so nervous. But it turned out that it was just an interview with the director.” She couldn’t believe it when she made the final cut. “There were so many good actors who tried out.”

Cuntapay recalled that she was in “Brokedown Palace,” “Delta Force 1” and “Delta Force 2.” And so she is used to the work system in international productions. “If they say your call time is 4 a.m., you better be there on the dot, ready to work.”

Unlike on local movie sets where you can chat incessantly with friends, she said, “it’s best to remain quiet on the set of a foreign movie, and talk only when there’s a need to.”

She won best actress at the Cinema One fest last year for “Six Degrees of Separation from Lilia Cuntapay,” sort of a documentary. But, she said, years of working as a bit player in local and international movies have taught her to keep her feet firmly on the ground. “Who is Lilia Cuntapay anyway? I’m just a working actress. I work hard because I respect my profession and I respect myself,” she said. Actually, she has a cult following on account of her signature aswang roles in local horror flicks.

In “Brokedown,” Concepcion shared a scene with lead stars Claire Danes and Kate Beckinsale. “I played an inn keeper,” she said. “But if you blinked, you might’ve missed me.”

She failed to take snapshots with Danes and Beckinsale. She explained, “We were told not to take pictures on the set. I follow rules.”

“The work hours were reasonable,” Nicolas said of the Vietnam war movie. “The foreigners were very professional. The scriptwriter sat down with us to discuss the film. After shooting my scene, the director, scriptwriter and assistant director took turns shaking my hand and thanked me for working with them.”

Concepcion recalled that, on the set of “Brokedown,” the production had provide her with her own trailer—a 10-wheeler truck equipped with bed, toilet, air conditioner and a refrigerator packed with food and drinks.

“I had to ask the assistant director if I could eat the food in the ref. I didn’t want to get charged. He said I should feel free to finish off all of it,” she recalled. The trailer’s door bore her name, and whenever she walked to the set, an assistant followed her, carrying her bathrobe. “I felt like a princess.”

Nicolas, who is also in the cast of Brillante Mendoza’s Berlin-bound indie film, “Captive,” was elated that a lot of theater actors had been asked to audition for “Bourne.”

“It will definitely have a positive impact on the local film industry,” she said. “It will provide more opportunities for Filipino actors and the production and creative staff as well.”

Concepcion and Cuntapay said that Philippine Film Studios, the local company working with the Hollywood team, has utmost faith in Filipino actors.

“No doubt, there is a wealth of talents in our country,” Nicolas concurred. “We could learn from the foreigners, and vice versa. We may have a different way of doing things, but we are professionals, too—creative, resourceful and hardworking.”

She could only guess why the Philippines had been chosen over Indonesia and Vietnam as a location for “Bourne Legacy.” “Perhaps they found the Filipinos friendly, hospitable, cooperative and charming.”

She expressed optimism that the “Bourne” experience would be fruitful for everyone concerned. “I am certain that [the foreigners] will appreciate the abilities of Filipino technicians and artists. After this, I hope that more international films will be shot here,” she said.