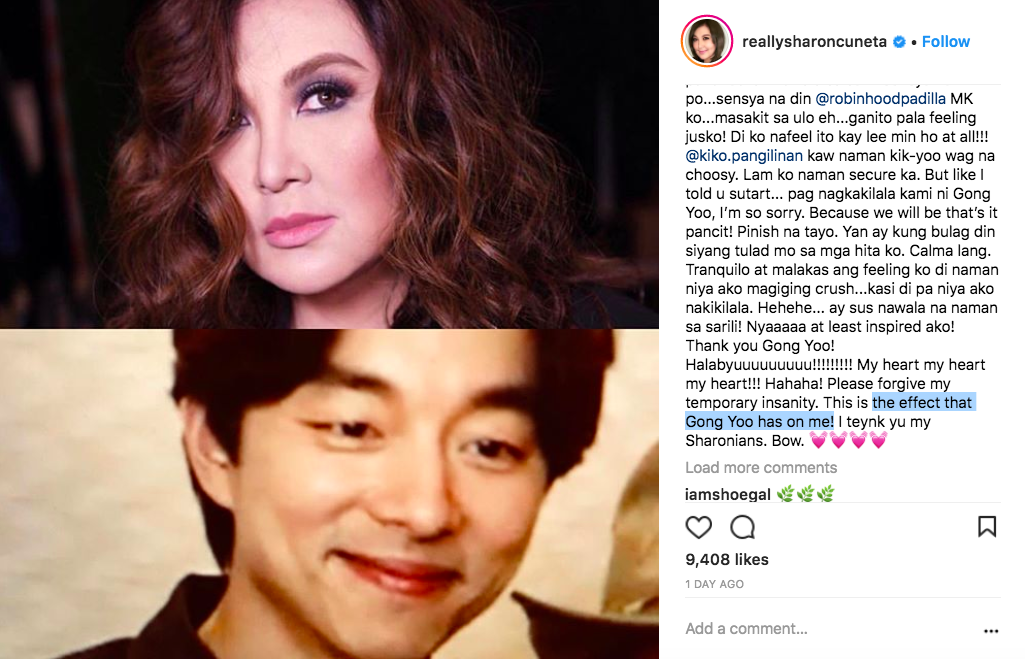 Megastar Sharon Cuneta goes fan mode over Korean pop superstar Gong Yoo and she declared her love for him in a very overwhelming fashion.

In an Instagram post on Friday, Cuneta expressed how shocked if not envious she is that Kuya Kim Atienza was able to interview the Korean star in his science-environmental educational weekly program “Matanglawin.”

Even though she is among the biggest stars of Philippine showbiz, she humbly introduced herself to the actor and told him what she believes so.

“Dear Mr. Gong Yoo @officialgongyoo, my name is Sharon, I am a singer and actress in the Philippines and I am your #1fan!!! I also think we would look better in a picture together than you and kuya kim. Please make more k-dramas and movies!’ she wrote.

The line was delivered by her leading man, ex-boyfriend and would-have-been husband Robin Padilla in their 1991 smash hit movie “Maging Sino Ka Man”. The line stayed in the consciousness of Filipino fans until this day.

She even jokingly said sorry to Padilla and her husband Sen. Francis “Kiko” Pangilinan for choosing the actor over them.

In closing, she sweetly apologized for her “temporary insanity” and such impulse is simply because of “the effect that Gong Yoo has on me!”

Cuneta isn’t the only Filipino celebrity who has gone crazy over the Korean actor. Television sweetheart Anne Curtis has also publicly declared her love for Gong Yoo and has gone into different lengths with her fandom. She even got to see him in person.