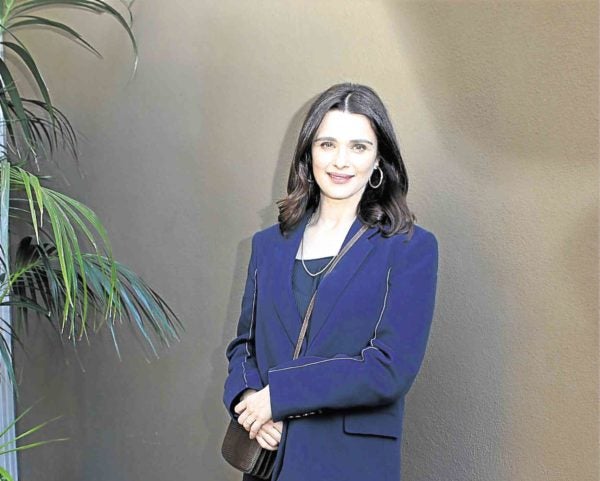 LOS ANGELES—Rachel Weisz is in the news for her announcement that she is pregnant with Daniel Craig’s baby and appearing in a same-sex love scene with Rachel McAdams in “Disobedience.”

In an interview with the New York Times’ Maureen Dowd, Rachel announced, “Daniel and I are so happy. We’re going to have a little human. We can’t wait to meet him or her. It’s all such a mystery.”

That may explain Rachel’s loose attire when we recently interviewed her at the Four Seasons in LA. She wore a large blazer (we actually thought of teasing her if it was Daniel’s), blouse and a roomy, colorful skirt.

It will be the first child together of Rachel, 48, and Daniel, 50. The actress has a son, Henry, 11, with director Darren Aronofsky. Daniel has a daughter, Ella, 26, with his ex-wife, Fiona Loudon.

“Just like any working mom, I try and find balance,” Rachel said. “It’s hard for all mothers. I don’t have a secret recipe. You just take time off in between.”

It looks like Rachel will also take a break during her pregnancy. The actress, who filmed “The Bourne Legacy” partly in the Philippines (Daniel came for a short visit), said she had no coming projects except “The Favourite,” which she has completed and will be shown later in the year.

The London native and her costars, McAdams and Alessandro Nivola, are earning good reviews for their performances in “Disobedience,” the first English language film of Chilean director Sebastian Lelio.

The two Rachels play forbidden lovers in “Disobedience,” which became known as “the movie where Rachel Weisz spits in Rachel McAdams’ mouth” after its well-received premiere in the Toronto International Film Festival.

Sebastian, who directed last year’s “A Fantastic Woman,” an acclaimed film about a transgender woman, adapted Naomi Alderman’s novel of the same name, which follows a rabbi’s lesbian daughter, Ronit (Weisz) as she returns from New York to her Orthodox Jewish community in North London. She finds out that Esti (McAdams), her former lover, is married to her cousin Dovid (Alessandro), her rabbi father’s chosen successor.

“Disobedience” is an absorbing, multilayered consideration of love forbidden by faith and tradition.

Rachel, who also produced “Disobedience,” explained why she chose to bring Naomi’s novel to the big screen. “I was born a woman, I am a woman. Half of the planet Earth is women. I’ve seen films by men with men in the central leads, which I love. Women tell stories differently. Vive la différence. I want to hear women stories alongside the men’s.” 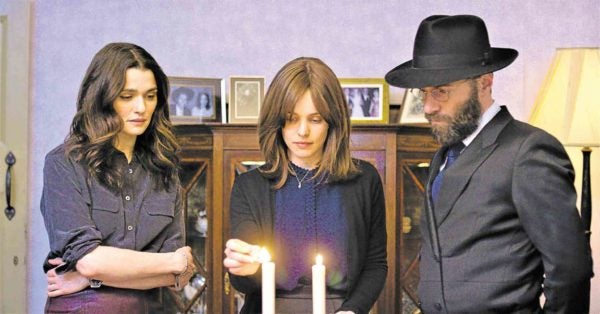 How did you prepare for your love scene with Rachel McAdams? It’s hot, intense and beautiful. Particularly as a woman, I actually talked to some men about this. When you have a sex scene, you’re always like, ugh, is this really necessary for the story? Like if this scene wasn’t in the film, wouldn’t the film still make sense?

In this case, the scene was absolutely necessary. Not only necessary for us—it’s like the center of the film. There’s repression in this society—a repression toward Esti’s sexuality.

When they are alone, they can express themselves. So, to me it’s emotional. In terms of preparation, there was no method acting.

We didn’t prepare before, but this was the only section of the film where Sebastian did this—he storyboarded it so he showed us the images.

It was a long scene. It ended up being about six minutes, so it took a whole day to shoot. He said, “I want this moment and then this moment.”

It all centered around one woman’s face in close up. Then, the other woman was outside of the frame so you, the audience, have to imagine where this other woman is, where her face, tongue or finger is, what’s happening.

How was Rachel McAdams cast? Sebastian and I both talked about who would be Esti. Rachel was the first person that we offered it to. We were incredibly lucky that she read the script, and she really wanted to do it. She said, “I love this.” I spoke to her on the phone and, you know, she’s Canadian.

But she just massively identified with the character. To quote her, she said, “My heart bled for Esti.” The kind of conundrum that Esti is in—she is deeply religious and loves her husband, community, job and students, but she’s gay. She can’t be herself. Rachel found that conundrum very moving, so we were lucky.

This film marks Sebastian Lelio’s first time to direct an English-language film. Which of his films made you decide to get him to direct this movie? “Gloria.” That film was astonishing to me. It’s about a 58-year-old woman, her sexual desires, dating miseries and comedic turns. I’m going to generalize massively—in most American films, that woman would be the granny or the auntie with two lines.

What Sebastian did was, he took that woman because every 58-year-old woman has a sexuality. They’re the center of their lives, but films tend to push them into the margin.

What attracted you to make a film about the story set in an insular Orthodox Jewish community in North London? The film could have been set in the Amish community in Pennsylvania.

Remember “Witness,” that movie with Harrison Ford? That was a different story, but it was also about a closed community. I was looking for a story about two women. I found many that were set in the 1950s when to be gay was taboo.

Naomi Alderman, who wrote the novel, grew up in this community, then she left it. Like Ronit, she went to live in New York, so she’s writing from the inside about having left it. So it was extraordinary.

The film delivers a strong message about the courage to love whoever you want.

Talk about casting Alessandro Nivola as a rabbi. Oh, yeah, he’s a hot rabbi (laughs). It’s like, how do you meet such a rabbi (laughs)?

Alessandro and I worked together like 20 years ago on a Michael Winterbottom film called “I Want You.” So, I’ve known him since then.
I thought Alessandro would be wonderful. Then, he read it, and he really connected with it in the same way that Rachel connected with Esti.

He understood this man. He understood being part of the patriarchy, but also finding this extraordinary moment of forgiveness and allowing his wife to be free. It’s the most empathic moment. It’s the opposite of a macho moment.

What are your next films? The next film that will be coming out in the fall is “The Favourite,” directed by the Greek director Yorgos Lanthimos.

It doesn’t have two but three central female characters, all very complicated, quite difficult women jostling for power in the court of Queen Anne in England in early 18th century.

Who are the two actresses costarring with you? Emma Stone and Olivia Colman.