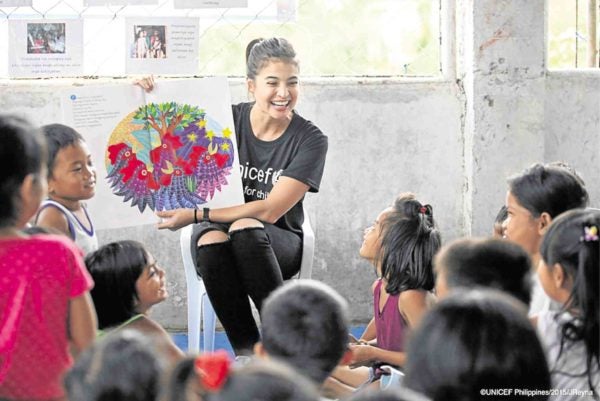 Anne Curtis has been supporting the United Nations Children’s Fund (Unicef) since 2009 and was also named Unicef Celebrity Advocate for Children. —UNICEF

Anne Curtis is all geared up to take part in the London Marathon on April 22, and the children of war-torn Marawi in Mindanao “will keep me inspired running those 42 kilometers,” she said.

“Yes, the war is over, but when you see the current living conditions of the children there and their schooling, it’s totally different,” Anne, who trained for three months, told Inquirer Entertainment during her recent launch as the first celebrity endorser of shopping mobile app, Shopee. “All of the proceeds that I raise will go to them.”

Anne, who has been joining marathons for years, has been supporting the United Nations Children’s Fund (Unicef) since 2009, and was also named Unicef Celebrity Advocate for Children.

Anne has two movies coming up: “Buy Bust” has been bought by distributor, Well Go USA, for a North American release, while she teams up with former “T.G.I.S” costar Dingdong Dantes in “Sid and Aya (Not a Love Story),” which was filmed in Japan.

Anne revealed that she did not shoot a movie for two years because she couldn’t find a material that excited her. She felt that she has matured in choosing her roles and candidly admitted that she would prefer an acting award over box-office returns.

“Being a box-office queen is just adding the cherry on top,” she said. “At the end of the day, what’s more important for me is a film’s content or storyline. It’s better to have a story that you’re very happy doing than having one that’s maybe not as deep, but rakes in a lot of money at the tills.”

Anne, who renewed her contract with ABS-CBN recently, expressed her excitement at the type of movies she has been getting.

“This is why I’m so happy to be working with Viva at the moment [as] I have for the past 21 years,” she said. “The projects that they’re doing and the scripts that they’re willing to produce aren’t the typical box-office fare. They’re more open to what is ‘now,’ with storylines that are relevant, relatable and current. The public’s mindset and taste are changing, which is awesome. I’m happy that these scripts are falling on my lap.”

After belting out Sia’s “Chandelier” at the launch, to which she apologized to the crowd afterward, the 33-year-old TV host, said she has been contemplating on releasing an album that features an all-original Pilipino music (OPM) lineup. “I’m planning to launch an album that I have already put together but have yet to release,” Anne, who mounted two concerts in the past, said. The album is titled “Forever Young.”

As for her married life, Anne said that she and celebrity chef Erwan Heussaff, are “very happy.” “It’s as if we went back to the dating stage,” she quipped with a smile.