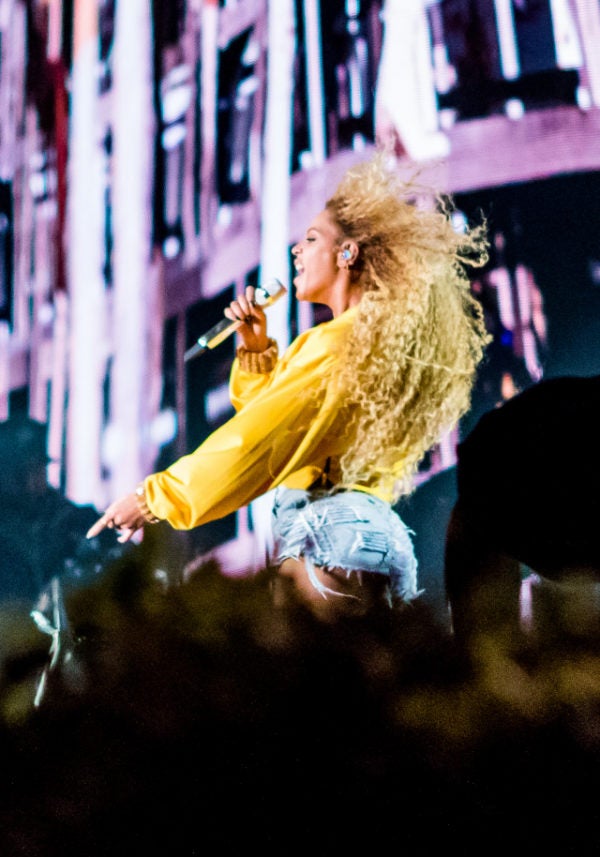 Beyonce returned spectacularly to the stage Saturday with a joyous, homecoming-themed party at the Coachella festival where she delighted fans with a rare reunion of her former trio Destiny’s Child.

Before a sea of some 100,000 people in the southern California desert, the pop superstar headlined the second night of the premier global music festival, ending a year-long hiatus from live music as she gave birth to twins.

Beyonce showed no sign of slowing down after her maternity leave, singing and strutting her stuff with little break for two hours as she led around 100 back-up dancers and musicians.

Her husband, rap mogul Jay-Z, popped up on stage toward the end of her set to join in their song “Deja Vu”. But he turned out to be only a preview of a less routine guest appearance.

With an audio recording of novelist Chimamanda Ngozi Adichie’s essay “We Should All Be Feminists” allowing Beyonce a moment to prepare, she re-emerged being elevated to the stage in an unmistakable silhouette of three figures.

It was their first reunion since Beyonce’s Super Bowl halftime show in 2013. The group propelled Beyonce to stardom but was also beset by internal friction.

On Saturday, Beyonce referred to her bandmates as her “sisters” — and was also joined on stage by her real sister, Solange Knowles.

Beyonce made clear from the start that Coachella was about reuniting, with an announcer starting the show by welcoming guests to her “homecoming.”

A school’s worth of brass and string players played from stadium-style stands as Beyonce entered to a New Orleans-style march. She sported an all-American outfit of tight jean shorts and a collegiate sweatshirt — the Greek letters, of course, starting with “B.”

After revving up the crowd with fireworks and the boisterous “Crazy in Love”, Beyonce offered a take on “Lift Every Voice and Sing”, the unofficial African American national anthem.

Beyonce voiced pride that she was the first black woman to headline Coachella. She is one of the few women to top the bill of any major festival, a sign of lingering male dominance of the music industry.

Next weekend, Beyonce may want to check her shoes — after changing into a racier bodysuit, she appeared to hold herself back at moments for fear of dancing her feet out of her boots.

Set only to percussion, Byrne updated the song about African Americans fatally shot by police or in other racially charged incidents.

Reciting each name, from Emmett Till who was lynched in 1955 to Stephon Clark who was shot dead by police last month in California’s state capital Sacramento when holding his cell phone, Byrne’s band implored the crowd, “Say his name!”

The track belied the tone of Byrne’s set, which was infused with his signature sly irony. Barefoot in a gray suit, Byrne opened sitting in a school desk and holding a brain, which he serenaded with “Here,” a track about neuroscience off his new album “American Utopia”.

Byrne, in what he has described as his most ambitious stage project since “Talking Heads”, designed a strikingly sleek space with chain curtains delineating a clear floor and his 11-piece band, dressed identically to him, all wireless.

Dancing first with mime-like body thrusts, with Byrne throwing his hands forward as if off-kilter on the Talking Heads’ classic “Same As It Ever Was”, the band took the shape of a campfire party as the sun set on the palm trees behind them.

The band took turns playing solos that showed the scope of Byrne’s global influences, from Latin-inspired bongo drums to a Middle Eastern-tinged whammy bar session on guitar by Byrne himself.

Coachella also marked an unusually intimate return for “X Japan”, megastars of Japanese metal in the 1980s who are planning their first new album in more than two decades this year.

Accustomed to packing arenas, the group managed to pull in a smaller but respectable crowd of hundreds despite the misfortune of playing at the same time as Beyonce.

“X Japan” paid tribute to its two late members — guitarist Hide and bassist Taiji, who both died in apparent but contested suicides — with the song “Endless Rain” as well as holograms that reunited them on stage.

Previewing the new music, which frontman Toshi will sing in English in his piercing voice, “X Japan” showed its blend of furious hard rock and symphonic structure with key songwriter Yoshiki — topless with a neck brace after years of physically devastating head-banging — alternating between drums and piano.

“X Japan” also brought two guest guitarists — Wes Borland of Limp Bizkit and Richard Fortus of latter-day “Guns N’ Roses” — a sign of the deep esteem the band enjoys in the rock world, if not yet the US general public. CC

As festivals bloom, a push to include women