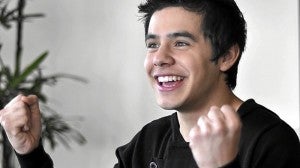 A handful of fans welcomed him at the airport.

Archuleta, who was recently added to the roster of stars of the Kapatid network, or TV 5, will reportedly be putting down the mic for a while to try his hands at acting in a prime-time series.