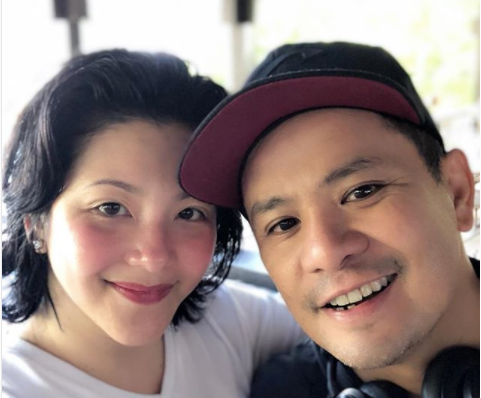 Asia’s Songbird Regine Velasquez could barely breathe from the funny antics of her husband, comedian Ogie Alcasid. It seems that Alcasid’s comical nature on television does not stop even when at home, as Velasquez took to her Instagram last April 8 to share a video of Alcasid doing a ridiculous dance for all her followers to see.

“I [have] no words!!!” Velasquez wrote on her post. She was lying in bed while Alcasid danced in front of her with his back turned. Velasquez couldn’t help but laugh uncontrollably, her laughter a cross between a whistling kettle and a screaming banshee, as Alcasid busted his absurd moves for her. Alcasid then turned to face Velasquez in the end of the video and pointed a playful menacing finger at her.

Right after sharing the video of Alcasid’s dance, Velasquez followed it up with another video, this time of Alcasid singing a song he made about their journeys. The video was reposted from Alcasid’s Instagram, which said, “A new inspiring song about our journeys. #grabtayobes.”

“Each of us have our own journeys. Some may be long, some may be short. The thing is, we have to start and we have to end it. And it begins now,” said Alcasid seriously as he stared into the camera.

He then broke into song in an unnaturally high-pitched voice, which got Velasquez in stitches once again.

The aftermath? An overcome Velasquez crying tears of joy.

“#theaftermath #wifeishappy #grabtayobes,” wrote Alcasid in a video post on his Instagram that same day. His video showed Velasquez sitting down as she wailed and screamed in laughter, covering her face and wiping her tears. “Umiiyak ako, mama!” shrieked Velasquez toward her husband.

It seems as if Alcasid has successfully uncovered the secret to a happy marriage: humor.  /ra