Half-century and counting, Kool and the Gang makes world dance 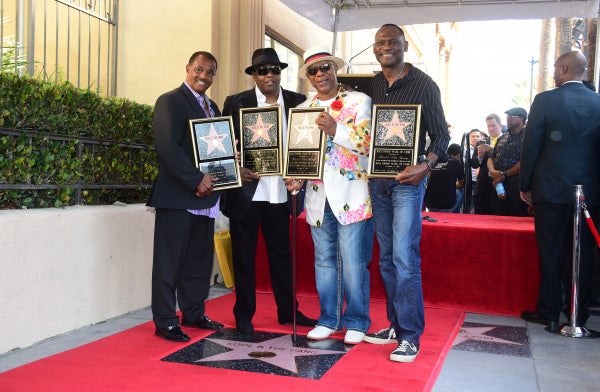 Band members (L to R) Robert Bell, Ronald Bell, Dennis Thomas and George Brown from Kool & The Gang after the unveiling of their Star on the Hollywood Walk of Fame in 2015 © AFP PHOTO / FREDERIC J. BROWN

The funk classics of Kool and the Gang have found eternal life in everything from stadium pump-up songs to hip-hop samples to wedding parties.

Yet more than 50 years after forming, the group itself has hardly slowed down.

“We do about 100 shows a year, all around the world, in every place you could imagine,” Ronald Bell, one of four founding members of the group who is still active, said as Kool and the Gang passed through New York.

Hailing from just across the Hudson River in Jersey City, Kool and the Gang has toured North America, Europe and Asia incessantly, sometimes playing three or four shows in a single weekend.

The group has also found fans playing in countries less frequented by US musicians including Algeria, Cuba, Kenya, Peru and Uganda.

“That is phenomenal to me, to have that music cross all cultures like that,” Bell said.

“To me, that’s unexplainable. I had nothing to do with that. That’s the Creator. Music is a universal language,” said the 66-year-old convert to Islam.

On a recent Friday night at the B.B. King Blues Club and Grill near Times Square, fans — some of them young — were singing along to “Fresh” before the lyrics to the song even started.

Other hits of Kool and the Gang include “Celebration” — which has become a standard at New Year’s Eve parties and in stadiums — and the dance-floor favorite “Jungle Boogie.”

J.T. Taylor, the frontman from 1978 to 1988 when Kool and the Gang enjoyed its commercial peak, is no longer the face of the group, but the latest singer, Walt Anderson, resembles him both in appearance and voice.

Kool and the Gang has achieved its staying power by remaining foremost a collection of musicians, whose roots are in the hard-working world of jazz rather than celebrity pop.

“I wanted to be like John Coltrane and the trumpet player wanted to be Miles Davis,” said Bell, a saxophonist whose first group was called the Jazziacs.

“We transitioned to Kool and the Gang when we found we could make some money doing this,” he said with a laugh.

Kool and the Gang, whose members started playing as a group in 1964, brought together jazz with the sounds of soul, Motown and funk. But the style has shifted over the years from largely instrumental works in the 1970s such as “Jungle Boogie” as well as “Open Sesame” and “Summer Madness” before Taylor came in as a vocalist.

The group’s initial sound provided a rich base for early hip-hop which sampled liberally from Kool and the Gang — who had little say in the matter and initially earned nothing from rap tracks.

“One time I listened to Tribe (Called Quest) and I heard a solo in there. I said: ‘Wait a minute, that’s me playing!'”

He has more mixed feelings about modern-day pop artists. He broadly appreciates the revival of old-school funk represented by Bruno Mars, the 32-year-old who was the big winner at the latest Grammy Awards.

“The rap artists are a little more inspirational.”

Singer Erykah Badu, he said, sounds a lot like the late Billie Holiday.

Still, he credits Mars for his success and notes that Kool and the Gang were hardly innovators in their time.

Ronald Bell only occasionally joins on stage these days but his elder brother, 67-year-old bassist Robert “Kool” Bell, has missed only two concerts in 50 years, according to Ronald.

Ronald Bell still tours with the band, helping out with the production and working on a documentary about the group. He also continues to write.

WATCH: Man grooves to Michael Jackson’s ‘Remember the Time’ like a pro