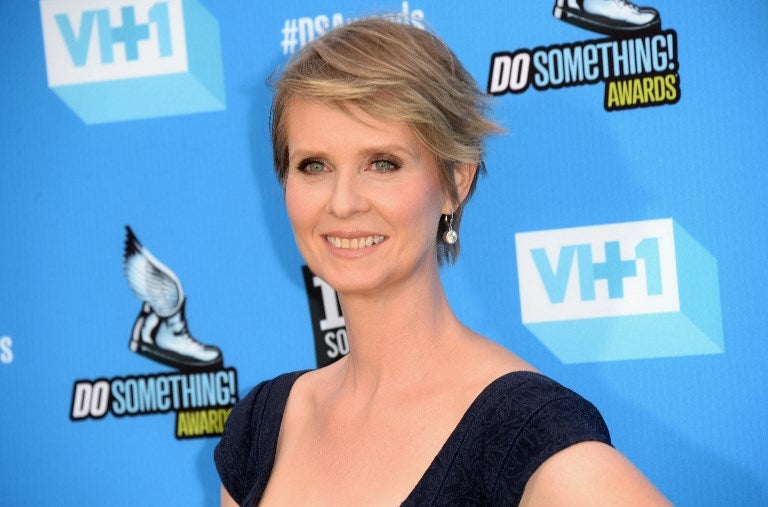 Actress Cynthia Nixon, the US actress who shot to international stardom as tough-talking lawyer Miranda on “Sex and the City,” announced March 19, 2018, that she is running to become the governor of New York state. AFP FILE

The 51-year-old declared her candidacy with a two-minute campaign video posted on Twitter that showed her at home with her wife and children, riding the subway, taking her young child to school and speaking at liberal political causes.

The move confirmed growing speculation that Nixon intended to challenge incumbent Democratic state governor Andrew Cuomo, which went into overdrive last week when her wife, Christine Marinoni, stepped down from her job at the city’s department of education.

The actress and liberal activist, who has campaigned for gay marriage, public schools and access to women’s healthcare, threw her hat into the ring saying she was “sick of politicians who care more about headlines and power than they do about us.”

“Our leaders are letting us down. We are now the most unequal state in the entire country with both incredible wealth and extreme poverty. Half the kids in our upstate cities live below the poverty line. How did we let this happen?” she said on the video.

“I love New York. I’ve never wanted to live anywhere else but something has to change. We want our government to work again — on health care, ending mass incarceration, fixing our broken subway.

“Together we can win this fight,” finished the New York born and raised Nixon, who said she grew up with her mother in what she called “a one-bedroom, fifth-floor walk-up”.

New York, the fourth most populous state in the United States, goes to the polls to elect a governor on November 6. But Nixon remains a left-field candidate with Cuomo very much the favored contender ahead of the Democratic Party primary on September 13.

Despite the stardom brought by her role alongside Sarah Jessica Parker and Kim Cattrall on the wildly successful television comedy “Sex and the City,” which aired on HBO from 1998-2004 and spawned two spin-off movies, the actress lags far behind in the polls.

A recent Siena College Research Institute poll found that Cuomo is overwhelmingly favored by Democrats over Nixon by 66 to 19 percent.

It remains unclear how much Cuomo may be damaged by the recent conviction of an aide for bribery. According to The New York Times, his name was mentioned 163 times during the eight-week federal trial.

Nixon worked for years as an actress before hitting the big-time with “Sex and the City” and won a Tony Award — America’s most prestigious stage acting awards — for her role last year in play “The Little Foxes.”

In addition to the video, Nixon has set up a campaign fundraising page that echoes some of the language used by 2016 Democratic Party presidential contender Bernie Sanders who electrified the left before ultimately losing to Hillary Clinton.

The page stipulates that Nixon “won’t be accepting any corporate contributions” and that “instead our campaign will be powered by the people.”

The mother of three is far from the first US actor to venture into politics. Republican president Ronald Reagan got his political start after the world of entertainment as a two-term governor of California from 1967 to 1975.

Arnold Schwarzenegger, the Austrian-born body builder is another actor turned two-term California governor, who was in office from 2003-2011.

Former television comic Al Franken — for whom Nixon once campaigned — also served as Democratic senator of Minnesota from 2009 to 2018, until he was forced to step down over sexual misconduct allegations. /cbb