Rihanna on Snapchat making fun of domestic violence in ad, 'Shame on you'; stocks of the app dropped after | Inquirer Entertainment
Close
menu
search 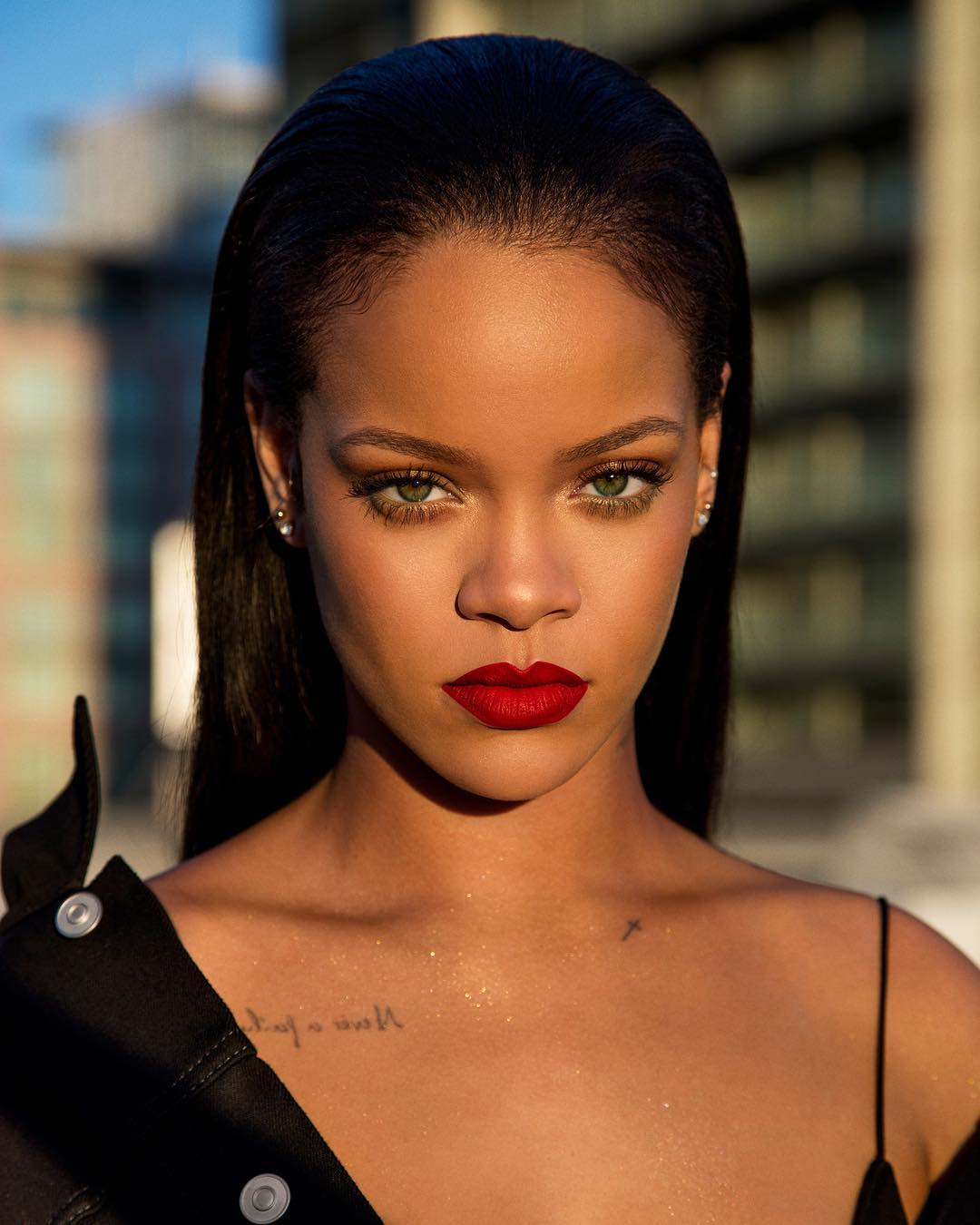 Rihanna took a stand against social media app Snapchat for running an ad that made fun of domestic violence. The result — stocks of the app dropped by as much as nearly 5 percent last week.

The ad for Android and iOS game “Would You Rather?” appeared on Snapchat around March 11, surprising the social media app’s users. It asked whether they would rather slap Rihanna or punch Chris Brown.

Rihanna suffered domestic violence at the hands of Chris Brown while they were still in a relationship. In 2009, Brown pleaded guilty to the assault case filed against him by the singer. In a documentary released in 2016, Brown admitted to feeling “like a f*cking monster” when he attacked Rihanna in 2009.

It comes as no surprise, therefore, for Rihanna to call out Snapchat for its ad. Through a post in her Instagram Stories, she said, “I’d love to call it ignorance, but I know you ain’t dumb! You spent money to animate something that would intentionally bring shame to DV victims and made a joke of it!!!”

“This isn’t about my personal feelings cause I don’t have much of them… but all the women, children and men that have been victims of DV in the past and especially the ones who haven’t made it out yet,” Rihanna lamented. “[Y]ou let us down.” 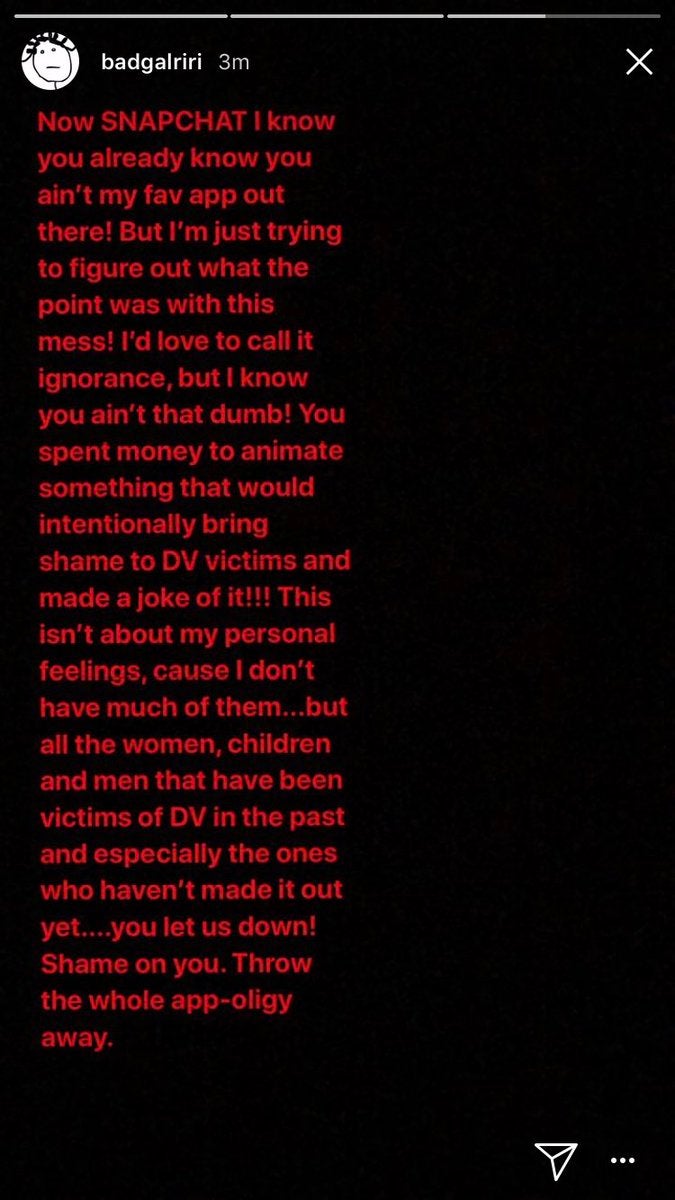 Netizens began sharing screengrabs of Rihanna’s post and that of the ad, with most of their reactions echoing Rihanna’s sentiments about the insensitivity of the ad. 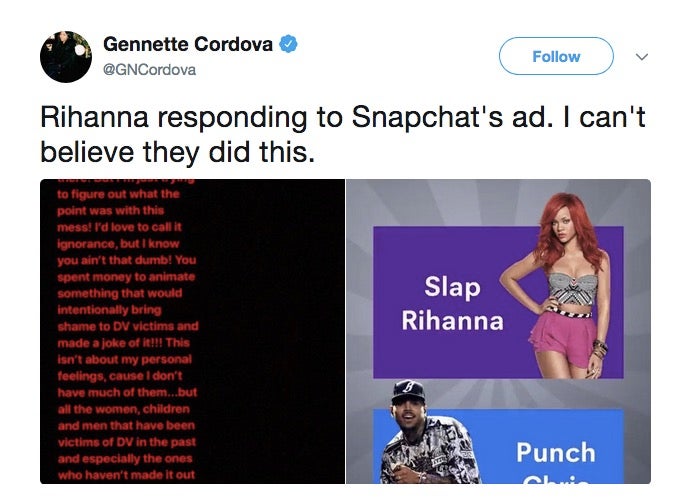 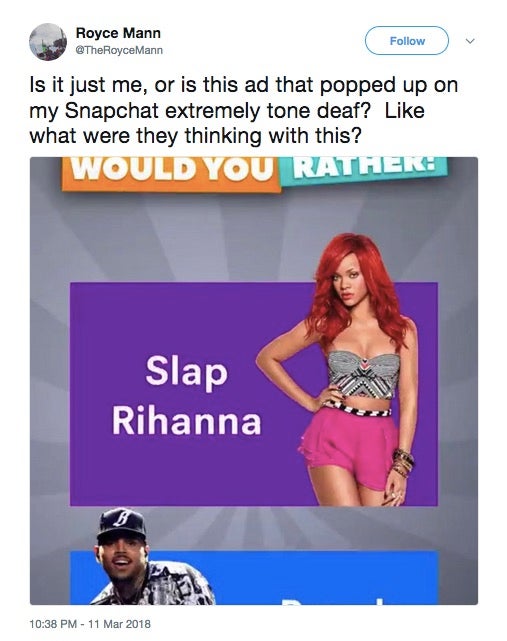 Even Chelsea Clinton spoke up. She criticized the ad for being “[j]ust awful. Awful that anyone thinks this is funny… Awful that any company would approve this…” 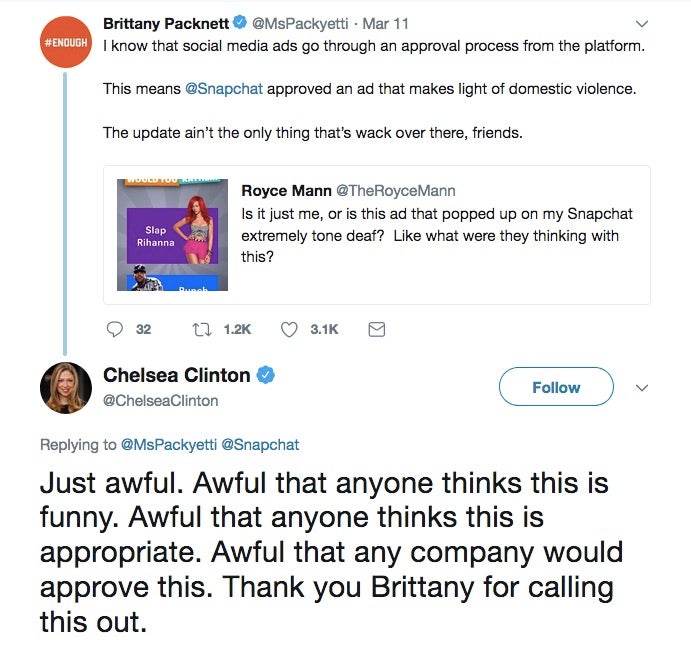 Snapchat issued its statement via BBC’s Newsbeat, saying that “[t]he advert was reviewed and approved in error, as it violates our advertising guidelines. We immediately removed the ad last weekend, once we became aware. We are sorry that this happened.”

Still, the effect of of Rihanna’s reaction to the ad was strong, as it had financial repercussions — Snap Inc.’s stocks went down. Snapchat’s stocks had already taken a dip when netizens first learned of the ad, but it went down further immediately after Rihanna posted her statement on Instagram. 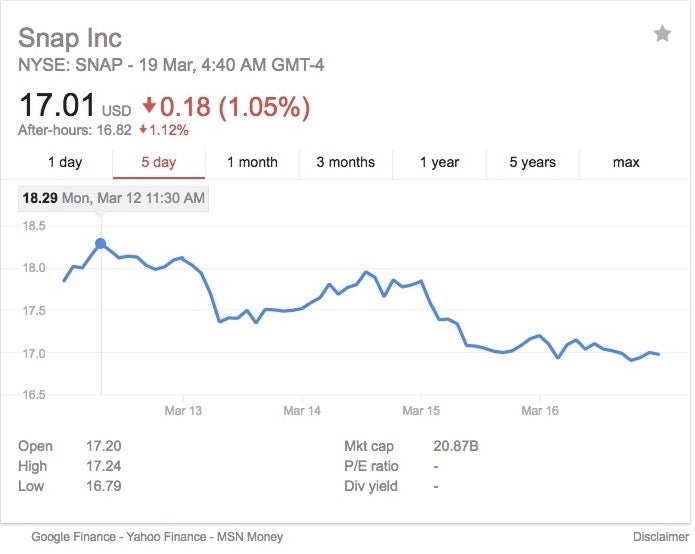