It’s all in the head | Inquirer Entertainment
Close
menu
search

It’s all in the head 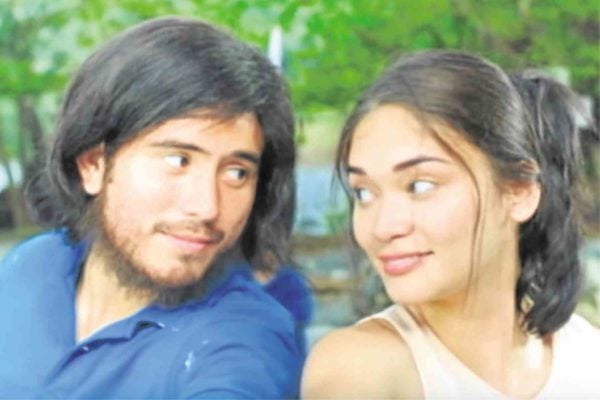 Gerald Anderson (left) and Pia Wurtzbach in “My Perfect You”

Pia Wurtzbach can act—and, given the right material and motivation, she can do it well.

Her sophomore starrer proves that, while still rough around the edges, hers is a talent that’s ripe for the picking. She acquits herself well beside her equally proficient but more experienced leading man.

This much is obvious in Cathy Garcia-Molina’s “My Perfect You,” where the 2015 Miss Universe winner is tasked to make her offbeat rom-com’s well-meaning but “insanely” implausible twist palatable.

In the film, Gerald Anderson plays graphic designer Burn Toledo, who’s desperately running away from a life that has had too many curved balls thrown its way.

His girlfriend breaks up with him after nixing his marriage proposal—in public! She’s scared of the possibility that Burn could be as “deeply troubled” as his mom, who has just taken her own life.

Worse, Burn loses his job when he couldn’t come to grips with his spirit-crushing personal debacles.

After his car plunges into a deep ravine, he finds himself stuck in the middle of nowhere. Then out comes Pia’s character, Abi, a lovely but similarly problematic woman Burn butts heads—and hearts—with.

Despite its paradise-like surrounding that is dreamy as all get-out, Abi’s resort has seen better days. In fact, Burn is its first customer in two years! That, in itself, should have clued him in, that not everything about Abi and her resort is as it seems. As they say, not everything that glitters is gold—or a diamond-in-the-rough.

The movie looks gorgeous, and it doesn’t hurt that Gerald and Pia deliver the thespic goods—but, there’s something amiss about the staging of its “medical” subplot.

Part of the pleasure of watching a movie is the suspension of disbelief that helps transport viewers to parallel realities that mirror their own. The element of anticipation is as crucial as the successful execution of a movie’s imagined tale. But it’s hard to get invested in a story whose ending you already know.

This is why we don’t like spoilers as vigorously as other film buffs. But, we can’t write further about Molina’s unconventional but well-meaning “rom-com” without mentioning a major spoiler. So, if you intend to watch it without knowing how its premise is realized, it’s best to stop reading at this point.

When you find out about the “big twist” behind Burn and Abi’s empowering “romance,” you can’t help but feel like you’ve just been “punked.” To put it simply using millennial jargon, you will feel “shookt” by it, because the love story that Molina and her hardworking actors go “out on a limb” to “create” and delineate turns out to be just—a figment of Burn’s overactive and coping imagination!

Yes, we get it. But, as viewers, you invest so much energy and empathy in the movie’s characters and their “pa-kwela” romance … only to realize later that much of what you just saw was merely a narrative device used to drum up interest and support for the production’s mental health advocacy.

It reminds us of that cop-out instalment (“Breaking Dawn”) of “The Twilight Saga” in which many crucial characters die—then, you’re told that the whole thing is just Alice’s visceral vision of the future! Not cool.

So much for “perfection.”