Aicelle and fiancé Mark take the ‘1st step to forever’ 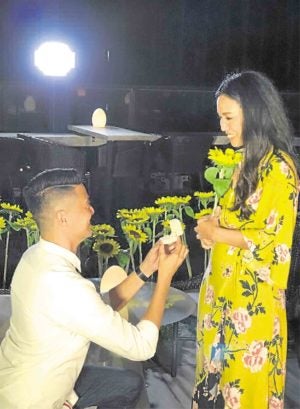 Singer-actress Aicelle Santos thought she had a gig, set on the rooftop of a hotel in Quezon City.

“I was told by my handler that I had a show to do,” she recalled. “But when I arrived at the venue, nothing was happening, so I thought I would be put on standby.”

Then, a video presentation, featuring Aicelle and boyfriend GMA 7 reporter Mark Zambrano, was played at the event.

From out of nowhere, Mark suddenly appeared, knelt down in front of her, and popped the big question, she recounted.

“I started planning for the proposal the moment we learned that she was going to the United Kingdom for the ‘Miss Saigon’ tour,” Mark told the Inquirer. “I ordered 100 of the best sunflowers from Benguet and had them delivered to Quezon City.”

The ring that he gave Aicelle also has a sunflower design “because that’s her favorite flower.” 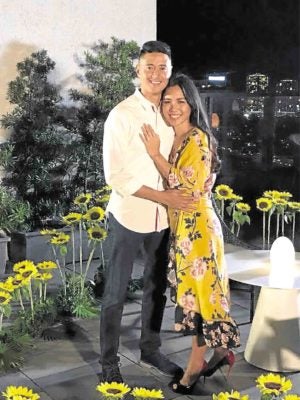 Mark set up the “surprise” proposal with a little help from her managers at GMA 7 and Stages, and some family members. “We scheduled a fake gig at the Seda Hotel—and the rest is history.”

He described the night as “perfect … [since] we got to share it with family and friends.”

After more than a year of dating, Mark, 40, believes the time is just right for him and Aicelle, 33, to take the next big step. “I am so happy,” she enthused.

“Words cannot express how happy I am when Aicelle said yes,” Mark quipped. “To be honest, I can’t see my future without her, and this is the first big step towards a lifetime of love and memories with her.”

Aicelle said she was “surprised” by Mark’s proposal. “We have talked about [getting engaged], but I had no idea when it would happen,” she shared with the Inquirer, describing the engagement as the “first step to forever.”

In a TV interview, Mark said Aicelle would be back from the UK tour next year and that the wedding would most probably take place a month after her return. Aicelle added she dreams of having either a beach or a garden wedding.

“I can’t wait to spend the rest of my life with you!” she wrote on Instagram.