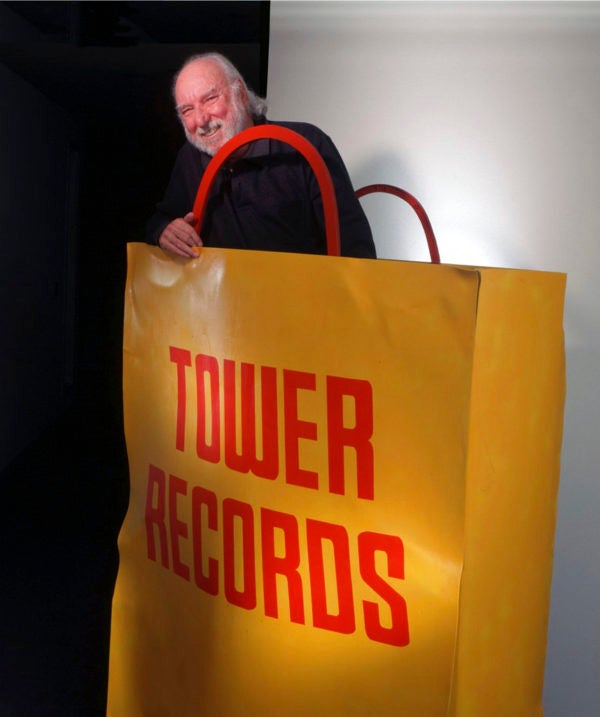 SACRAMENTO, Calif. (AP) — Russell Solomon, founder of the Tower Records chain that became a global phenomenon and changed the way people consumed music, has died. He was 92.

Russell Solomon first began selling music in 1941, at age 16, out of his father’s Sacramento drug store inside the historic Tower Theater building.

The makeshift record shop officially became Tower Records in 1960. Solomon, who preferred jazz, country and classical music, offered something other stores didn’t: A place to sift through every genre of music in one place, with the help of employees who loved music even more.

Solomon expanded to San Francisco in 1968, then to Los Angeles and eventually all across the world, with Tower Records operating 271 stores and selling $1 billion worth of records at its height in the 1990s.

Michael Solomon said his father’s theories about what a music store should be were simple: Large inventories, long and late hours, and control by local managers about artists and records each individual store should stock. The company’s more than 8,000 employees were music lovers who wore their clothes and hair however they wanted and showed up to work because they loved music as much as Solomon did.

“I’m sure he’ll go down in history as having the greatest record store chain in the world,” Michael Solomon said.

Solomon and Tower Records were the subject of a 2015 documentary by actor Colin Hanks that examined its iconic role in music in the 1970s and 1980s, with stars like Elton John and Bruce Springsteen talking about their love of the store.

Solomon, who never graduated high school, eventually rose to be number 335 on the Forbes’ list of the 400 richest Americans, according to the Sacramento Bee.

He delighted in the challenges of expanding his business worldwide, to England, Japan and beyond. In 1985, he nearly went to jail after opening his store in London on Sundays, not knowing labor laws prohibited it.

“It’s like climbing up a mountain. It’s a little bit dangerous to do; a lot dangerous. But risk is part of the adventure,” he told The Associated Press in a 1988 interview about his business expansion.

Those risks are part of what made it difficult for Tower Records to survive when technology began to drastically change the music business in the late 1990s and early 2000s. Consumers began to shift to the internet to download music or to buy it from retailers such as Walmart, who offered lower prices in exchange for a less intimate customer experience than what Tower provided. Russell Solomon said in interviews years later than the debt from earlier expansions helped lead to the company’s downfall, the Bee reported.

Michael Solomon took over the business in 1998, with Russell remaining chairman of the board. The financial pressures eventually became too great in 2004, when Tower Records first filed for bankruptcy before closing its doors in 2006.

But Russell Solomon had always resisted retiring — “What would I do if I retire?” he said in 1988 — and wasn’t yet done with music. He re-entered the music business just months after Tower Records folded, opening another music store in the original drugstore location. It lasted only three years.

“Maybe I’m believing in something that’s drifting away,” he told the Sacramento Bee.   /muf