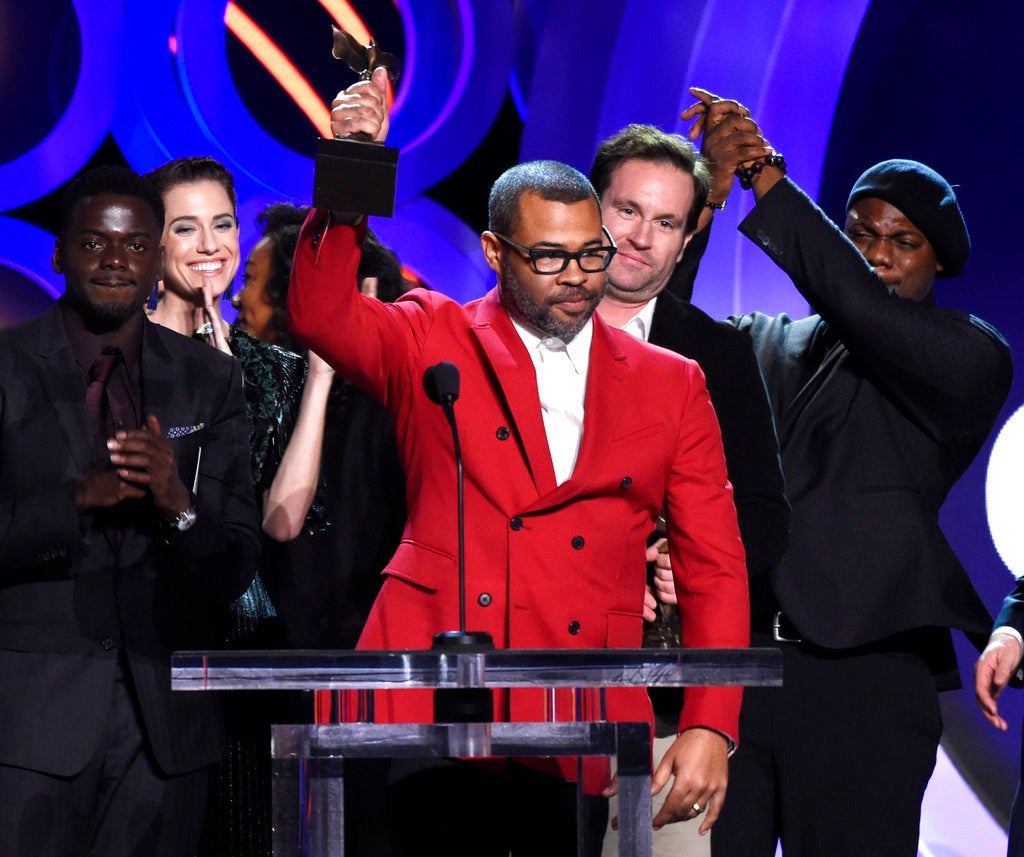 Jordan Peele accepts the award for best feature for “Get Out” at the 33rd Film Independent Spirit Awards on Saturday, March 3, 2018, in Santa Monica, Calif. (Photo by Chris Pizzello/Invision/AP)

HOLLYWOOD, California — Hollywood is set for a real-life cliffhanger on Sunday evening (Monday morning in Manila) at the Oscars: The race for best picture is coming down to the wire to cap an awards season overshadowed by scandal over sexual misconduct in show biz.

A dark crime comedy, “Three Billboards Outside Ebbing, Missouri,” has begun to pull away in late betting for the industry’s biggest prize, but Oscarologists believe a fairy tale romance, “The Shape of Water,” and a socially conscious horror movie, “Get Out,” will make it a photo finish.

“I’m guessing that ‘The Shape of Water’ will win, but that’s just a guess,” Gray said.

On the eve of Oscar night, however, Jordan Peele’s “Get Out” won best film and best director at the 33rd Independent Film Spirit Awards.

The wins for Peele’s directorial debut gave the Spirit Awards, a celebration of indie filmmaking, something unusual: a box-office behemoth. Although the horror sensation was made for just $4.5 million, “Get Out” grossed $255 million worldwide.

The Spirit Awards and the Academy Awards have come closer to mirroring each other. The last four Spirit winners for best film—“Moonlight,” “Spotlight,” “Birdman,” and “12 Years a Slave”—won best picture at the Oscars.

The 90th Academy Awards—hosted for the second straight year by late night funnyman Jimmy Kimmel—will be beamed live around the world by ABC from Hollywood’s Dolby Theatre.

The show caps a difficult few months during which the industry has declared war on the pervasive culture of sexual impropriety unearthed by the downfall of movie mogul Harvey Weinstein, an alleged serial sex attacker.

With the #MeToo and Time’s Up campaigns against sexual misconduct and gender inequality dominating the 2018 awards circuit, this year’s Oscar gala is seen as an opportunity for Tinseltown to support female filmmaking.

Greta Gerwig is only the fifth woman in Oscar history to be nominated for best director, but she faces tough competition from Guillermo Del Toro, the runaway favorite for “The Shape of Water.”

There was also the first nod in history for a female cinematographer, Rachel Morrison, who shot Dee Rees’ racial drama, “Mudbound.”

The Time’s Up initiative is not planning a coordinated protest on Sunday—like the striking red carpet “blackout” at the Golden Globes.

‘It’s not about red carpet’

But leaders of the movement told journalists that there would be “a moment that’s been carved out” during the Oscar ceremony.

“It’s really important that you know that Time’s Up is not about the red carpet,” said powerhouse Hollywood producer Shonda Rhimes (“Grey’s Anatomy,” “Scandal”).

In another nod to the women’s movements, the Academy of Motion Picture Arts and Sciences has tapped past winners Jennifer Lawrence and Jodie Foster to present the best actress Oscar, according to Variety.

Traditionally, the previous year’s best actor winner would present that statuette, but Casey Affleck, who triumphed in 2017 for “Manchester by the Sea,” withdrew under a cloud of sexual harassment accusations that he has denied.

Organizers are looking to rebound after last year’s flubbed announcement by Warren Beatty and Faye Dunaway of the best picture winner—the trophy was initially given to “La La Land,” when the actual winner was “Moonlight.”

In a surprise turn of events, Beatty and Dunaway have been tapped to present the same prize this time around, according to The Hollywood Reporter, although the academy did not respond to the AFP request for confirmation.

“The Shape of Water,” a story of love between a mute cleaning woman and a mystery merman-like creature set in the Cold War era, tops the nominations with 13, although observers expect the spoils to be fairly evenly spread.

The Oscars come this year with theaters registering the biggest February in domestic box office history, the $996.4 million in total sales largely driven by the record-breaking success of Marvel’s “Black Panther.”

“Reports on the death of movie theaters have, again, been greatly exaggerated,” BoxOffice.com chief analyst Shawn Robbins wrote in a commentary on the new figures. —REPORTS FROM AFP AND AP

TAGS: Get Out, Oscar Awards, The Shape of Water, Three Billboards Outside Ebbing Missouri