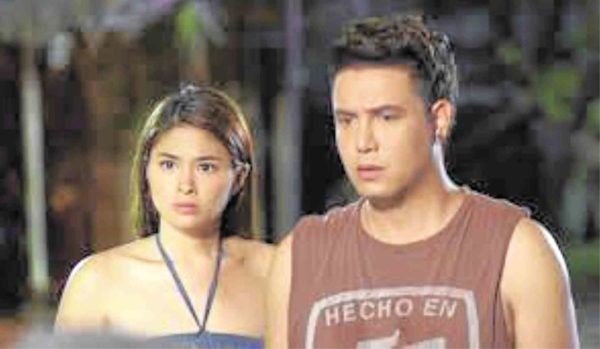 In Albert Langitan’s “Amnesia Love,” every attempt to make its gay protagonist manly is another turn of the screw that makes the movie more implausible and inconceivable than it already is. Its “pakwela” narrative progression has neither rhyme nor reason, so its risible gags and goofs feel manipulated and ludicrous.

Paolo Ballesteros has his work cut out for him with his task to turn the film’s swishy lead character, social media influencer Kimmer Lou, into Macky, a sight-for-sore-eyes babe magnet in a fishing village, after he becomes an amnesiac.

But, there are glaring gaffes in characterization that the film conveniently ignores: From the get-go, Pao is adorable and easy on the eye, but his “fishy” projection dilutes the compelling conflict that stems from Macky’s sexual ambiguity, and compromises the film’s believability. Moreover, Paolo looks more chunky than hunky—which is unflatteringly perceptible in close-up shots.

And it doesn’t help that “playing silly” isn’t a snug fit for Paolo’s screen muse Yam Concepcion, who’s a fish out of water in a genre that doesn’t play well to her strengths as an actress.

We’ve always been drawn to Yam’s exquisite loveliness and sassy allure, but comedic timing, as it turns out, isn’t one of her strong and reliable traits.

And the Oscar goes to…

For best picture, “The Shape of Water” looks like it would win the golden statuette, but we prefer either “The Post,” for its timely relevance and unblinking storytelling boldness, or “Call Me by Your Name,” for subtly but indelibly depicting the universality and genderless nature of true love.

Our bet for best director is Guillermo del Toro for making “The Shape of Water’s” high-wire cinematic act look easy, and its unlikely theme and romance accessible.

Gary Oldman, the frontrunner in the best actor race, delivers an award-worthy vanishing act in “Darkest Hour,” but the film is as slow-grinding and dreary as “Tinker Tailor Soldier Spy,” where he earned his first Academy citation. It wouldn’t be too bad, though, if the exceptional Timothée Chalamet (“Call Me by Your Name”) pulls an upset.

In his valedictory performance in “Phantom Thread,” Daniel Day Lewis puts his quiet intensity to good use, while Denzel Washington (“Roman J. Israel, Esq.”) turns in a dazzlingly delineated characterization of a man stricken with Asperger syndrome—but, the support for their performances has had little traction in the run-up to the Oscars.

Unfortunately, our top choice for best actor wasn’t even nominated: James Franco’s persuasive portrayal in “The Disaster Artist” deserves to be recognized, but the recent sexual abuse allegations may have derailed his Oscar chances.

The competition in the best supporting actor and actress categories are harder to call: It’s a toss-up between Willem Dafoe (“The Florida Project”) and Sam Rockwell (“Three Billboards”), who will and should win the coveted plum.

The race is also neck and neck between Laurie Metcalf (“Lady Bird”) and Allison Janney (“I, Tonya”), but the latter’s portrayal of Tonya Harding’s abusive, tough-talking and hard-driving mom is propelled by a wince-inducing crackerjack turn that is hard to ignore.

The run-up to the Oscars always gets us into a tizzy—with very good reason. But, the fact that its “quality” films entertain as much as they educate is something that local filmmakers can aspire for. It is what the Metro Manila Film Festival is not—and, on a smaller scale, what Cinemalaya used to be.

In fact, along with the winking kitsch of “Sin Island” and the awkward LGBTQ posturing of “Amnesia Love” that are on “head-scratching” display in our cineplexes this week, we also get “limited” servings of Greta Gerwig’s “Lady Bird,” Martin McDonagh’s “Three Billboards Outside Ebbing, Missouri,” Guillermo del Toro’s “The Shape of Water,” Steven Spielberg’s “The Post” and Luca Guadagnino’s “Call Me by Your Name”—which are five of the nine nominees vying for best picture at the Oscars on March 4 (morning of March 5 in Manila).

Jordan Peele’s “Get Out” and Christopher Nolan’s “Dunkirk” were respectively shown in March and July last year, while Joe Wright’s “Darkest Hour” was screened last month. Only Paul Thomas Anderson’s “Phantom Thread” has yet to be released here. So, it’s the perfect time for film aficionados to go to the movies.