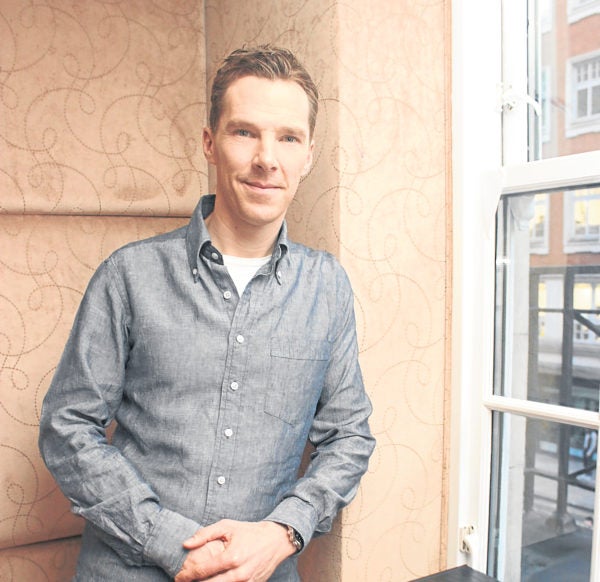 LOS ANGELES—Add president to Benedict Cumberbatch’s many distinguished roles. But this latest title is for real—the actor is now the president of Lamda (London Academy of Music and Dramatic Art), UK’s oldest drama school, from which he graduated in 2000.

Onscreen, Benedict continues to shine in two television projects. He tackles the title role in “Patrick Melrose,” a limited series based on five semiautobiographical novels written by Edward St. Aubyn that were compiled in a single volume, titled “The Patrick Melrose novels.” The acclaimed thespian portrays the author’s fictional alter ego, Patrick, who comes from a dysfunctional rich English family, coping with deaths, alcohol and drug addiction.

In “The Child in Time,” Benedict not only acts but produces, as well. In the first drama production of his production company, SunnyMarch, he tackles the main protagonist in Ian McEwan’s award-winning novel—Stephen Lewis, a children’s book author whose only daughter, Kate, disappears while the two are in the supermarket. It’s a time travel story etched by trauma and sadness.

On the big screen, Benedict has several projects coming up: “Avengers: Infinity War,” “Mowgli” (imagine his mellifluous voice as Shere Khan), “Rio,” “The Grinch,” “Gypsy Boy,” “The Man in the Rockefeller Suit,” “Rogue Male” and “Magik.”

But Benedict’s top-priority role these days is play dad to Christopher Carlton and Hal Auden, his sons with wife Sophie Hunter, a theater and opera director.

Excerpts from our recent talk at The May Fair Hotel in London, where he showed up looking relaxed in a chambray shirt, tee and dark jeans:

Will you do more theater? Work-wise, I’m trying to measure things around family commitments at the moment. Theater is pretty punishing for that reason, so that’s the only reason I’m pausing as to when.

But being the president of Lamda is a great excuse to do theater and drag as many students as are allowed into a rehearsal room, a dress rehearsal, as well as a show.

What was it like to be part of that epic Marvel Studios 10th anniversary class photo? I was next to Lizzie (Elizabeth) Olsen. It was amazing. You feel like a pixel in a massive picture. Yeah, it was incredible to be part of that and kind of moving, not least because of it being 10 years’ worth of people’s lives and the high risks they took, when it’s that big a franchise and how successful they’ve been at bettering their output with every single film.

Talk about your new series, “Patrick Melrose.” It’s an extraordinary story of an incredible human being. It’s no secret that Patrick Melrose is very much the alter ego of the author, Edward St. Aubyn. It’s very close to his life story—about a boy who was brought up in very privileged circumstances, but he was, behind doors, being sexually abused by his father for years.

The story then lurches into his 20s, when Patrick was a full-blown heroin addict and a very chaotic human being on the edge of losing his sanity and his life, collecting his father’s ashes in New York. Then, it’s on to the third episode, based on the third book called “Some Hope,” where he’s struggling with the early steps of sobriety and trying to find a true purpose in life.

In the fourth episode, he’s a husband and father and trying to do a good job and failing still because of the tense relationship with his mother. In the fifth episode, it all comes to a head. At his mother’s wake and funeral, he finally reconciles who he is, and what he has to become to be truly saved, and move from being a victim to being a survivor.

For you, what does “The Child in Time” represent? It examines childhood and time literally, as in the title, “The Child in Time.” It’s about what it is to develop as a child and what it is to regress into being a child, and the failed experiment Stephen Lewis has with that. Stephen was someone who was asked to become an adult too fast in his life.

In order to have a childhood, he experiments with letting go of the normal social practices of being an adult and regressing to childlike behavior. It unravels him. It’s a form of therapy in a way or just an escape and release—and, sadly, it unmoors his sanity.

What drew you to the project? I was drawn to this Everyman character, quite far from some of the more extreme characters I’ve played and somebody who, to the extent that I wore some of my own wardrobe just on a technical level, I felt I could get closer to.

Although the piece was a rumination and very poetic in its nature rather than procedural, it was very much an investigation into the reality of what that would be like, with little filter in the way.

Also, it was a great script from a book, from a novelist (Ian McEwan) I have always admired but, funnily enough, that book had escaped my attention.

What have you been watching lately on television? I’m watching “Wormwood” at the moment.

What else do you watch? The news (laughs). I’ve been watching a lot of screeners because of [Bafta and Academy] voting and catching up with my peers’ work, just being inspired and wanting to see great movies.

You seem to be fascinated with Ian McEwan’s words. Why do they appeal to you? McEwan always dabbles in that peculiarly brilliant art of presenting a recognizable world, but with quite a dark uncanny twist, an undercurrent of threat, danger, loss or anxiety. There is always something perfect about his writing. It’s very direct.

I don’t remember the track—which is irritating, I know—but it’s by Wild Beasts, an English band. They’re brilliant. Before I jumped off the roof of St. Bart’s (Bartholomew’s) Hospital as Sherlock Holmes (in a scene), I had that emotional connection with John (Watson). I do a lot without music, but it’s a gift when you find a song that leads you toward an emotional state, or gives you a tool to help you get that.