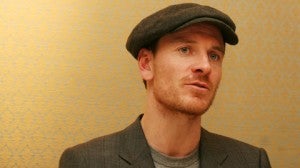 Since winning the best actor award at the Venice Film Festival last September for his performance in the Steve McQueen-directed drama, Michael has bagged similar honors from various critics groups, including the Los Angeles Film Critics Circle. He earned a Golden Globe best actor-drama nomination and is up for a possible Oscar nod as well.

Michael can look back with pride, not shame, on his 2011 movie roles, in which he likewise gained critical acclaim: as Carl Jung in David Cronenberg’s “A Dangerous Method”; Rochester in Cary Fukunaga’s “Jane Eyre”; and Magneto/Erik Lehnsherr in Matthew Vaughn’s “X-Men: First Class.”

“The essential thing was being very open in order to try to understand Brandon,” Michael said, in his soothing, calm voice, on how he tackled his role. Wearing an Irish cap, the Germany-born, Ireland-raised actor was relaxed and articulate. “I was in New York for like, eight weeks. I was in the best city in the world and I didn’t go out at all because I was indoors with Brandon, trying to figure him out. I don’t know if there was any formula. There were lots of reading through the script and breaking it down.”

Michael claimed that before director McQueen approached him for the role, he “didn’t know anything about sexual addiction. I took it a bit flippantly. I laughed at the idea, but then you get to meet people who are suffering from it and are very much locked into that condition. You realize how many lives really get devastated by it and how very real a problem it is.”

He talked about meeting a particular man “who opened himself up and told me stories… From those stories, I got a clear, specific insight into Brandon’s problem which has to do with intimacy and the problem with having any emotional content in a relationship. He just doesn’t feel safe exposing himself in so many other ways.

“Emotionally, he’s no longer in control of the scenario and feels very vulnerable and unsafe. That’s why when we see the scene with Marianne (Brandon’s coworker played by Nicole Beharie), we realize that this is the one relationship perhaps where he could find some nourishment and some healing.”

While professing ignorance about sexual addiction, Michael claimed that, as he often does in his roles, whenever he plays a character like Brandon, he does look at himself.

“That’s the best measuring stick I have with the character Brandon,” he said. “I didn’t want to distance him too much from myself. I wanted him to be one of us. I didn’t want him to be the guy with the sweaty palms in the corner, wearing a trench coat. I wanted to approach the role without any hiding behind anything. But I’m also very different from Brandon. Thank God I don’t have his life because he’s in a lot of pain. He’s somebody who doesn’t like himself very much. That’s the thing with addiction—if you have an active sex life or you are promiscuous or however you want to call it, it doesn’t mean you’re sexually addicted.”

He disclosed that in meeting people who are suffering from the addiction, there was a word that kept popping up: “shame” or “ashamed.” Michael said, “As in, ‘I was so ashamed of myself because it’s that feeling where you’re no longer in control of your impulses and compulsions. They’re driving you and you find yourself in some pretty dangerous circumstances.’”

Michael brought up another side to the addiction issue: “We haven’t really been talking about female sexual addiction which isn’t as rampant as male sexual addiction. But it’s there. You find women who have put themselves into extremely dangerous scenarios. There’s the shame in the lack of control of your own actions. You’re being dominated by this addiction.”

As to how Michael deals with sexual temptation in real life, he quipped with a smile: “The best cure for temptation is to just give into it, really.”

In “A Dangerous Method,” Michael’s Carl Jung often just converses with Viggo Mortensen’s Sigmund Freud, but it’s a tribute to these two actors, David’s director and Christopher Hampton’s screenplay, that these scenes are riveting.

Asked if he jammed with Viggo, a poet and musician, Michael answered, “There’s a YouTube footage where we were singing outside the Belvedere [in Austria]. We used to sing a lot. That’s something I do a lot of, anyway. It’s like somebody will say a phrase and I’ll sing the rest of the line. It’s like a way to be relaxed.”

What songs did he and Viggo sing? “Anything really,” said Michael, “like ‘Young Girl’” (by Gary Puckett & The Union Gap). He was told that the song’s refrain, “Young girl, get out of my mind,” was a fitting one for his characters in both “Shame” and “A Dangerous…”

“I remember Viggo and I came bursting into the makeup room and singing. Keira (Knightley) was getting her hair done. We made her and the makeup artist jump out of their skin,” said Michael.

As for poem readings with Viggo, Michael admitted, “My poetry skills are pretty non-existent. I’ve obviously looked at his work. I’m in awe of that. But I also play guitar though we never actually played music together.”

This year, Michael continues his amazing ride. He will be seen with Ewan McGregor in Steven Soderbergh’s “Haywire,” and with Charlize Theron, Patrick Wilson and Noomi Rapace in Ridley Scott’s “Prometheus.”