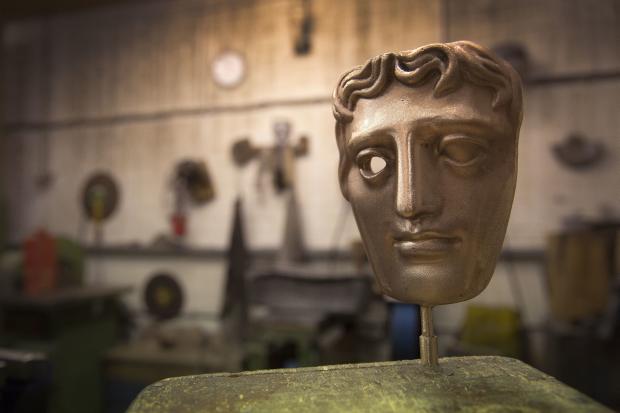 In this photo, taken Tuesday, Jan. 31, 2017, a bronze alloy Bafta mask stands in a foundry in West Drayton, London, ahead of the award ceremony in February. Designed by US sculptor Mitzi Cunliffe in 1955, New Pro Foundries has been making the bronze casts since the ceremony was created in 1976. The red carpet will be a sea of black as the movement against sexual misconduct takes center stage at the British Academy Film Awards on Sunday Feb. 18, 2018. (Photo by JOEL RYAN / Invision/AP)

Kate Winslet, Kristin Scott Thomas, Emma Thompson, Naomie Harris, Emma Watson and Gemma Arterton are among those saying that 2018 should be “the year that time was up on sexual harassment and abuse.”

Announcing a fund to support women and men battling workplace abuse – modeled on the “Time’s Up” movement in the US – the stars said “with our collective power, we can galvanize others.”

Former “Harry Potter” star Watson has given the fund 1 million pounds ($1.4 million), according to its page on the Go Fund Me website. Keira Knightley and Tom Hiddleston are each listed as having given 10,000 pounds.

Feminist activists and anti-violence campaigners are set to mix with the stars on the red carpet Sunday for the awards at London’s Royal Albert Hall. Many female guests are expected to wear black, as tremors from abuse revelations rumble through the awards season.

The issue has crossed the Atlantic, where the Old Vic Theatre has been rocked by allegations against former artistic director Kevin Spacey. London police are also investigating nine claims of sexual assault by Weinstein.

In a letter published in The Observer newspaper, 190 female stars called for an end to impunity for abusers and said “this movement is bigger than just a change in our industry alone.”

“We believe we need to use our power as communicators and connectors to shift the way society sees and treats us,” they said. “We need to examine the kind of womanhood our industry promotes and sells to the world.”

Prince William and the Duchess of Cambridge will also be in the audience Sunday night – and many people will be watching to see whether Kate joins in wearing black to support the fight against sexual abuse.

“Absolutely Fabulous” star Joanna Lumley will host the awards ceremony, where the monster fantasy “The Shape of Water,” the tragi-comedy “Three Billboards Outside Ebbing, Missouri” and the World War II flag-waver “Darkest Hour” are the front-runners.

All three are up for best film, alongside the sun-drenched romance “Call Me By Your Name” and the World War II drama “Dunkirk.”

Gary Oldman is the favorite to take the best-actor trophy for his Golden Globe-winning portrayal of British wartime Prime Minister Winston Churchill in “Darkest Hour.” He’s up against fellow Brits Daniel Day-Lewis for “Phantom Thread,” Daniel Kaluuya for “Get Out” and Jamie Bell for “Film Stars Don’t Die In Liverpool,” as well as American actor Timothee Chalamet for “Call Me By Your Name.”

The best-actress race is an international contest, pitting American Frances McDormand as a bereaved mother in “Three Billboards” against Britain’s Sally Hawkins for “The Shape Of Water,” Irish actress Saoirse Ronan for “Lady Bird,” US star Annette Bening for “Film Stars Don’t Die In Liverpool” and Australia’s Margot Robbie for “I, Tonya.”

Ridley Scott, whose films include “Blade Runner,” “Alien,” “’Thelma and Louise” and “Gladiator,” is set to receive the academy’s highest honor, the BAFTA Fellowship.

The British trophies, known as BAFTAs, are considered a key indicator of likely success at Hollywood’s Oscars in two weeks’ time.