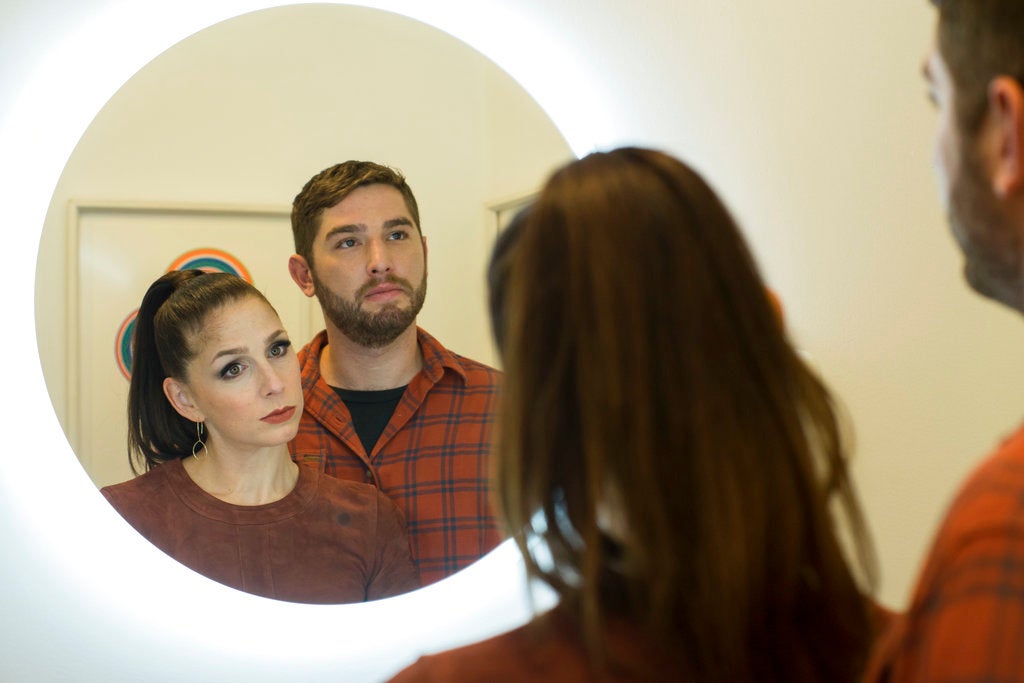 This image released by Sundance Now shows Shoshannah Stern, left, and Josh Feldman in a scene from “This Close,” a series premiering Feb. 14 on Sundance Now. (Gunther Campine/Sundance Now via AP)

LOS ANGELES (AP) — Shoshannah Stern and Josh Feldman have something to say about friendship, heartache and finding one’s place in the world in “This Close.”

The creators and stars of Sundance Now’s comedy-drama have another aspect of life to share: What it’s like to be deaf while grappling with the familiar challenges of young adulthood.

Stern and Feldman, both of whom are deaf, nurtured their series idea from a Kickstarter-funded campaign to webisodes to a 2017 Sundance Film Festival episodic-shorts showcase entry whose potential impressed Jan Diedrichsen, general manager for Sundance TV and the streaming channel Sundance Now.

“We immediately fell in love with both Shoshannah and Josh, and this unique perspective they had and this interesting voice they had,” Diedrichsen said.

Stern is an actress who’s had recurring roles in “Supernatural,” ”Weeds” and “Jericho.” When she complained of a disheartening audition to Feldman, a friend and aspiring screenwriter, he suggested they work on something together for her.

The efforts ultimately led to the six-episode run of “This Close” debuting Wednesday. Stern’s Kate is a publicist whose career is frustratingly stalled but who seems to have found security with fiance Danny (Zach Gilford). Feldman’s Michael has been dumped by the man he was to marry (Colt Prattes) but can claim a published graphic novel and a contract for another.

In an interview with The Associated Press translated by a sign-language interpreter, Stern and Feldman discussed overcoming Hollywood’s resistance to characters with disabilities and confused thinking by airlines.

AP: Was it difficult to pitch a show to producers in which the lead characters have a disability, still a rarity on TV?

Feldman: The first question we always got from everybody was, ‘Why is this character deaf? I don’t get it.’ … It was difficult for us to explain. But in real life, why is anybody deaf or why is anybody anything? In real life, I don’t know why I’m deaf. I was just born as is. So the deaf experience will come into the story, but it doesn’t need to be the central piece of the story. They didn’t understand that concept. … It’s two people living their lives.

AP: You’d considered making just one of the lead pair deaf. Why the change?

Feldman: We thought that if we made both of them deaf, then suddenly the audience would be in their world. But if it was one hearing and one deaf character, we’d probably make people feel like they were standing out and alienated from the world we wanted to create.

Stern: When you commit to authenticity in a story, when you commit to tell an authentic story, you can suddenly feel that come through. That’s something I really wanted for our show. So we said, why don’t we go for it and make both the characters deaf? Of course, Josh asked me, ‘Who’s going to play Michael?’ I said, ‘You are.’ … He couldn’t have said no.

Feldman: I didn’t have a choice.

Stern: I can be forceful.

AP: In episode one, we see an airline inexplicably bring your characters wheelchairs to help them board. That’s really happened to you?

Feldman: Everything you see has either happened to us personally or we have a friend it’s happened to. Everything. My hope is we put it on TV as a laugh line and then it will not happen to deaf people in their life anymore. We get menus in Braille all the time. But we took that out of an episode because it was getting to be a little too much.

AP: Given the hurdles your project faced, how did you stay motivated?

Feldman: Because we were friends first, we had a support system embedded. So once the ball started rolling, we would take shifts in terms of, I’d freak out and she’d be the strong one. And then she would freak out, and I would be strong. We never had a freak out at the same time.

Stern: Once we arrived at what eventually became ‘This Close,’ we kind of fell in love with the project. We became fully committed to it. … We doubted the world around us because we kept getting ‘nos’ all the way, ‘no’ after ‘no’ after ‘no.’ Yet we never doubted that the world we created was good enough. NVG

WATCH: Trailer for ‘This Close’, series about deaf best friends, written by and starring deaf people

For the deaf, Rio samba parades are all about the vibes