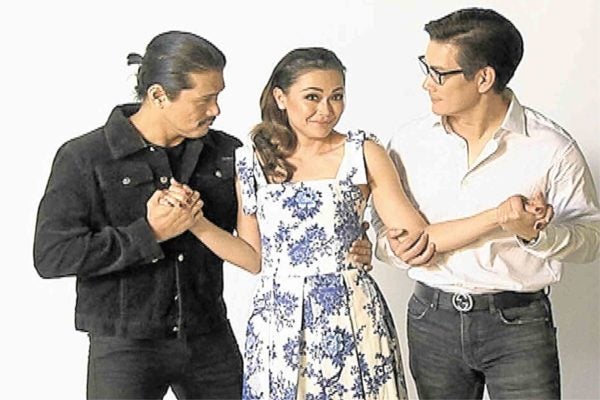 Daytime TV darling Jodi Sta. Maria’s new rom-com series, “Sana, Dalawa ang Puso,” has started telecasting on ABS-CBN before “It’s Showtime”—and it’s a happy homecoming for Jodi, because that’s where her hit series, “Be Careful With My Heart” held prominent sway for many months, some seasons ago.

To make sure that viewers won’t forget her standout feat and where she reigned, Jodi’s old screen partner in “Be Careful,” Richard Yap, is her TV consort in her new show, as well—so, it’s a “hope springs” homecoming for him, too.

The onscreen reunion gives us the golden opportunity to recall how their hit TV-film tandem has been shaped and fared through the years, as well as figure out where the TV fates will take them next.

Jodi has always been a pert and versatile performer, so the changes and improvements have more often been on Richard’s part.

A latecomer to the acting trade, the former businessman was lured to the thespic profession when, more than five years ago, he was tapped to play a business tycoon or taipan for the hit teleserye, “My Binondo Girl.”

It was deemed crucial for the series that the actor cast as the tycoon be implicitly believable in the key role, unlike many other series where scruffy character actors merely and improbably pretended to be wealthy, well-born and powerful.

At first, Richard looked and felt awkward due to his lack of experience, but his innate believability made up for the temporary glitch.

In time, the tyro actor found himself liking his new “sideline,” and was cast in his costarring role with Jodi in “Be Careful”—as Ser Chief, her employer—and future husband.

Its “aspirational” story of the maid who married her dreamy and older widower-boss was such a perfect fit for homebound female viewers’ domestic fantasies that it went on and on, making the stars’ big bosses realize that they had a hot property in their “maturing” love tandem that they should periodically and profitably showcase in new TV-film projects, from year to year.

But, there was a problem that they first had to address and remedy in Richard’s rather stodgy and conservative screen image.

Yes, he filled a blank because he was a maturing lead, but did he have to come across so old? After all, there are some men in their 50s who still look fit and fab—why couldn’t Richard be buffed and styled up to look like them, and excite the ladies?

Consider it done. Richard in “Sana, Dalawa ang Puso” looks leaner, more playful and a decade younger, and the transformation gives his hit tandem with Jodi greater edge and bite!

But, Richard now has his work cut out for him to excel and excite even more, because Jodi has been given a look-alike persona and a second leading man in the new ABS-CBN daytime show, in the roguish and rowdily entertaining star, Robin Padilla.

How will Richard measure up to Robin’s “proven” screen antics? Aba, abangan!

Read Next
How real-life heroes got to play themselves in Eastwood film
EDITORS' PICK
Every Filipino home can now be a smart home with realme TechLife
PLDT Home Prepaid WiFi customers now under the care of Smart
Nestlé Philippines’ ‘NESCAFÉ Plan’ bags Grand Anvil at PRSP 56th Anvil Awards
Wesley So officially a US citizen
‘Pilgrim of peace’ Pope Francis heads to war-scarred Iraq
WHO: Arrival of vaccines in PH ‘a powerful step’ towards economic recovery, normalcy
MOST READ
Kris Aquino dispels rumors on son Josh getting married, thanks Ogie Diaz for defending him
Wesley So officially a US citizen
Ginebra trades Slaughter to NorthPort for Standhardinger
LTO’s P500-M deal for screws draws scrutiny
Don't miss out on the latest news and information.