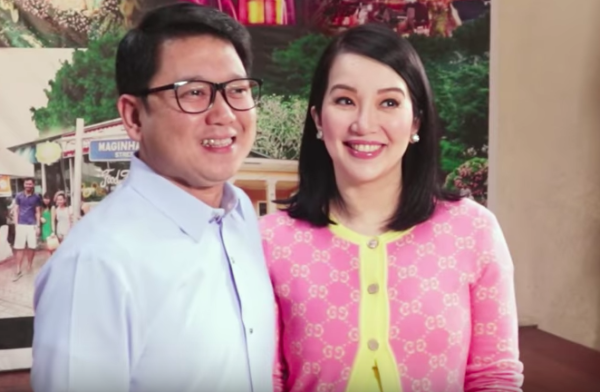 The Queen of All Media was tight-lipped about whether she has completely closed her doors for ex-boyfriend, Quezon City Mayor Herbert Bautista.

“Ang hirap nito. Tinitimpla ko kasi it will hunt me eh whatever I say now will be replayed and you will remind me na on January 27 sinabi mo ‘to Kris. Natatakot lang ako talaga. Hindi ko talaga kayang sagutin,” she said at the recently held grand launch of her latest local cosmetics brand endorsement.

Aquino, in past interviews, has been vocal that her relationship with the mayor almost ended up in marriage. She even once revealed that the actor/politician proposed to her with a one-carat, heart-shaped, D-color diamond ring.

However, just as it would have been her second attempt down the aisle, her would-have-been dream come true crashed when she revealed that the latter cancelled their wedding.

“I distinctly recalled talaga na at that point there was nothing. So many plans had been hatched that didn’t push through. Dinasal ko lang talaga na God ma-accept ko lang if this is it, then let me be okay with it.”

“I think you will always appreciate a person who was always there when you were at your lowest. But also that doesn’t erase the fact that he also broke my heart. I’m being honest. So that’s why sinasabi ko, mas okay nang friends kami.”

Furthermore, a lot more complications on her part are at stake should she decide to get back with Bautista. Among those are stipulations in her multinational endorsement deals that she cannot be involved with an elected public official.

Such involvement would mean forfeiture of contract and an obligation to pay the whole contract value including penalties.

“Kaya that’s why let’s just be friends,” she closed laughing.#