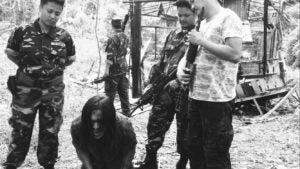 Filipino filmmaker Lav Diaz makes a splashy comeback in the A-list festival, Berlinale, which will be held in Germany from Feb. 15 to 25.

The last time Diaz competed in the top-tier film event was in 2016, with the eight-hour historical epic, “Hele sa Hiwagang Hapis,” which won the Silver Bear Alfred Bauer Prize.

Described as a rock opera, the black-and-white film is set during the martial-law era, in a far-flung village in the Philippines that is terrorized by a gang of militias.

The head of this year’s Berlin jury is German director, screenwriter, composer and producer Tom Tykwer, renowned for such films as “Run, Lola, Run” and “Cloud Atlas.”

The opening film in the 2018 Berlinale is Wes Anderson’s animated movie, “Isle of Dogs.”

Hailed as one of the world’s most prestigious film festivals (along with Cannes and Venice), the Berlinale attracts 20,000 film professionals, practitioners, critics and fans from over 120 countries.

Another Filipino film, Keith Deligero’s “Babylon,” is competing in the Shorts section.