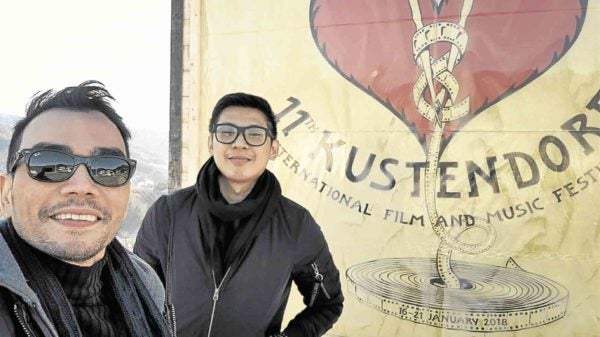 In spite of the freezing weather, Villaluna and Manatad enjoyed themselves at the event, which was held in a traditional village that Serbian filmmaker Emir Kusturica had built for his film, “Life Is a Miracle.”

Villaluna recalled that Romanian filmmaker Cristian Mungiu, head of the jury of last year’s Shanghai fest, had told Kusturica about “Pauwi Na,” winner of the top prize in the A-list event held in China.

“I am happy that the ‘Pedicab’ family is continuing to travel and share its story with the world,” Villaluna told the Inquirer. “I am especially elated because this Serbian fest is programmed by a three-time Cannes winner [Kusturica].”

“Pauwi Na” was shown alongside such internationally acclaimed productions as Cannes winner Ruben Östlund’s “The Square” and Paolo Sorrentino’s “The Young Pope.” Villaluna and the other directors in the Contemporary Trends section also took part in workshops with students.

Manatad, for his part, said: “It’s nice to be back to an event that I’ve always loved. It feels good that the festival recognizes my work as at par with films coming from different parts of the globe.”—BAYANI SAN DIEGO JR.

Read Next
From indie to maindie
EDITORS' PICK
High inflation: Your P1 is now worth only 87 centavos
UK’s Boris Johnson will resign, BBC reports
High-risk pregnancy: Reducing your risk is in your hands
Geek out at TOYCON 2022 powered by Smart Signature
House energy committee chair Arroyo bats for cheap electricity
Unemployment rate up to 6% in May
MOST READ
Suspect in grisly killing of missing woman in Bulacan arrested
Kim Atienza’s daughter flaunts bikini body in response to critics of her ‘revealing photos’
Japanese artist who created ‘Yu-Gi-Oh!’ found dead in the sea
FDA probes popular Filipino noodle brand for ‘high level of ethylene oxide’
Don't miss out on the latest news and information.