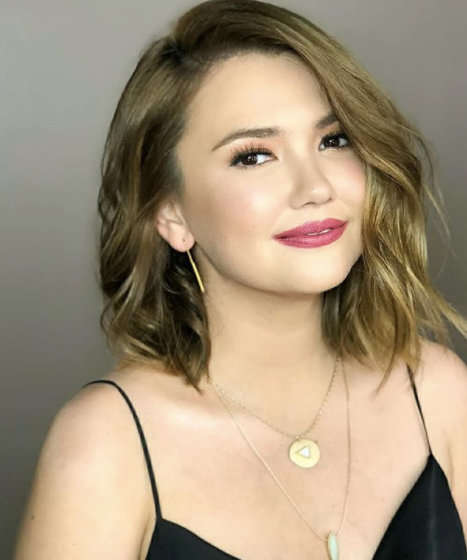 Kapamilya actress Angelica Panganiban is known for her no-holds-barred attitude in life, love and career. Just as she’ll do everything for the man she loves, she will also do everything to bust out if something goes wrong, to the extent of almost hiring a private investigator to discover a partner’s extra-curricular activity.

For the women who may be thinking of doing the same, Panganiban shared how much, more or less, has to be prepared to hire a professional private investigator and get the job done.

She did not name names but the “hugot queen” dropped clues about who she was talking about.

But her showbiz big sis warned her not to give too much clues as she might accidentally name the guy.

In the heat of the moment, Panganiban shared one more instance of her busting out an ex-boyfriend’s fling.

“Umabot ako sa ganong katangahan tapos minsan eh … ,” everyone laughed in eagerness to know what the “hugot queen” has to say next.

‘[Then he asked] ba’t mo hawak ‘yung cellphone ko? [She answered] ginamit ko ‘yung ilaw,” she said as she herself burst in laughter.

Panganiban has caught the headlines again following her bitter separation from ex-boyfriend John Lloyd Cruz over his alleged  infidelity. Cruz is linked to sexy actress Ellen Adarna with whom he has reportedly fathered a child.

Both have since been mum about the issue, nor have made any public confirmation about the real status of their relationship. They however, keep their fans hungry for more revelations through their social media posts.