Paulo’s Goyo: Portrait of a hero as heartthrob 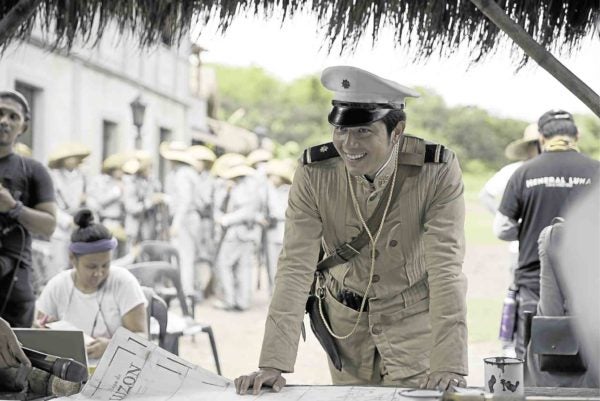 Although it’s the furthest from his mind, actor Paulo Avelino has found himself cast as the go-to guy when it comes to historical movies. After playing the iconic heel, Tony Javier, in Loy Arcenas’ “Ang Larawan,” he will topbill another period movie, Jerrold Tarog’s “Goyo: Ang Batang Heneral.”

Paulo devoted as much time and effort in preparing for the musical as he did in portraying the young revolutionary general, Gregorio del Pilar. For “Larawan,” he took voice classes; for “Goyo,” horseback riding lessons.

In an exclusive interview with the Inquirer, Paulo recalled that he had received voluminous reading materials and other documents from the “Goyo” director, as well. He even attended a lecture given by historian Ambeth Ocampo.

Paulo related that one of the major issues that the historian had noted concerned the hero’s romantic escapades! “He told us that Goyo was in love with Remedios, not her sister Dolores.”

That necessitated a last-minute revision in the script. “But most of the facts that Ambeth discussed, I had already read in the books given by Jerrold,” Paulo recounted. “There were minor details that Ambeth contested, but for the most part, he and Jerrold had the same ideas about Goyo.”

Like the historian and the filmmaker, the actor sees Goyo as a “young man who was given a responsibility that was far too huge for him to grasp.” Paulo acknowledged: “He could’ve have handled it well. It’s just that he wasn’t able to focus on it. I guess it was a matter of maturity.” Or lack thereof.

“Goyo was really just a kid,” the actor explained. “He was only 21 when he became a general.”

In a roundabout way, he sees in Goyo the same struggles that confront today’s crop of teen stars who are suddenly thrust into the maddening world of show—usually via reality programs, the same route that Paulo had taken as a neophyte in the GMA 7 tilt, “StarStruck,” a decade ago.

“Goyo was a lover boy,” he admitted. “In a way, I could compare him to young actors who had just attained instant fame. Of course, they’d get overwhelmed by all the attention.”

They’d get drunk on, and distracted by, the glitz and glamour. “They’d forget their priorities, the reason why they joined show biz, in the first place,” he clarified. “Are you doing it for the money? To help your family? Or do you want to be a good actor and give your best in each movie?”

Goyo, the ABS-CBN actor pointed out, had the same dilemmas as any millennial. “The youth will be able to relate to this film. Like Goyo, millennials also find themselves saddled with major responsibilities—whether in school, the workplace or at home.”

In that way, “Goyo” will be entirely different from the TBA team’s previous film, the sleeper hit, “Heneral Luna.”

(“Heneral Luna” and “Goyo” are part of a trilogy on history, which will be capped by a movie on Manuel L. Quezon, said Jerrold.)

“I would say that ‘Heneral Luna’ was more external. He was a strong character: flamboyant, a fighter,” Paulo remarked. “While ‘Goyo’ is more internal. Goyo kept everything bottled up inside him. There were a lot of things going on in his head. He seemed uncertain about what he should do.”

While talking about his journey as an actor, Paulo, who is marking a milestone this year (as he turns 30 on May 13), inadvertently retraced the steps of Goyo the hero as heartthrob.

“When I first entered show biz, it was just for fun,” he owned up. “It was an artista search. Since all my friends wanted to audition, I joined, too.”

He was baffled because everyone was fiercely competitive. “While I was just there to enjoy myself. True enough, I didn’t win.”

Through the years, however, he became more conscious of, and conscientious about, excelling in his chosen profession.

The newcomer considered character actors Nonie Buencamino, Ronnie Lazaro and Joel Torre as his role models then. (Paulo recently got to work with Nonie in “Ang Larawan” and Ronnie in “Goyo.”)

“One thing I learned from them is digging deeper into yourself,” he related. “The importance of getting to know yourself. Acting is very complex. You can attack a role in different ways.”

This early, this hunky heartthrob is thinking of his legacy. “I’m not getting any younger,” he quipped. “Why should I force myself to stay a leading man forever? What’s the use of money when you die? I’d rather make films that I want and teach the younger generation that there is another path they can take … away from the usual celebrity-artistajourney that everyone dreams of.”