Kris Aquino defends her 'bunso' Erich Gonzales from basher: 'Get a life and your facts straight' | Inquirer Entertainment 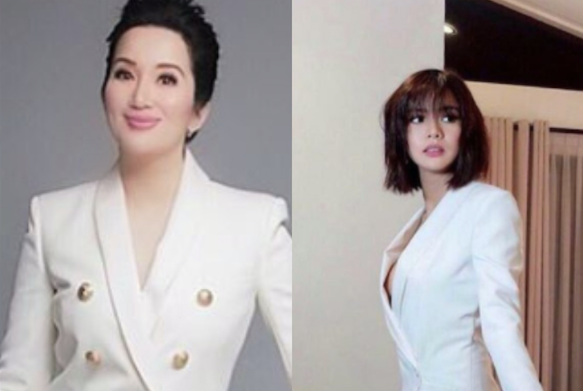 Kris Aquino proved that she was a true friend to actress Erich Gonzales, after the Queen of All Media defended Gonzales from a basher who called the actress a “home-wrecker.”

This started when Aquino posted several photos of Gonzales with her two sons, Josh and Bimby. “Friends are the family you got to choose,” the media personality started off her dedication with a touching tribute.

She then went on about their tight bond: from her sons calling the actress “tita” (aunt), to when Gonzales affectionately calls her “Ate Kris.” Aquino also recalled Gonzales had “the saddest eyes” when she visited Gonzales after being heartbroken.

Aquino also proudly said she is hosting a screening of her friend’s latest movie “Siargao” after she gets back from Japan.

“Especially when it comes to my ‘bunso’, @erichgg has always been the sweetest & most responsible- we love her & are super HAPPY that GOD healed, restored, and now continues to give her SUCCESS!” Aquino praised her friend.

“Friends are the family you got to choose.” She’s tita Erich to my 2 & i’m her Ate Kris… when we 1st visited after her heartbreak- she had the saddest eyes. Then the smile slowly returned… We waited for her to get home from her Japan trip & tomorrow- i’m proud to be able to host a screening of SIARGAO for our LOVE! Especially when it comes to my bunso, @erichgg has always been the sweetest & most responsible- we love her & are super HAPPY that GOD healed, restored, and now continues to give her SUCCESS! She’s proof- what FAITH can do & what a difference a year can really make.❤ 3 January 2018. Day 3 of 365.

While followers of Aquino applauded her for being a friend, one netizen dropped a comment that accused Gonzales of being a “kabit“(mistress) and “panira ng pamilya” (home-wrecker) of “Siargao” director Paul Soriano, whom she had worked with in the movie.

Not backing down, Aquino quickly went on the defensive by saying the “troll/fake account” deserved a clapback from her, as she told the troll to “get a life and get your facts straight.”

“I’m the ninang (godmother) of Direk Paul and Toni – this fake news is just malicious. Direk and Toni are solid and happy,” Aquino gave this assurance to her page’s followers, with reference to Soriano’s wife, television host Toni Gonzaga.

Ending her reply, the Queen of All Media dropped the final bomb onto the basher by saying: “P.S. @erichgg has a handsome and very intelligent suitor.” She also added the hashtag #NONEGATIVITYZONE. 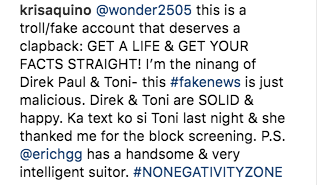 Some followers even joined Aquino in defending Gonzales from the basher.

One netizen even urged the basher to “start a new life” this new year.

This was not the first time Aquino has clapped back at negative commenters, as she has built a reputation among fans and followers for using her wit at answering back. JB

LOOK: Kris Aquino’s clapback to being dissed for eating where she wants to