On Thursday, Dec. 21, we, the cast of “Once on This Island” recorded our cast album! At the famed recording studio Power Station only a stone’s throw away from Circle in the Square, the entire cast gathered to lay down our vocal parts for our show (which has just been dubbed a Critics’ Pick of the New York Times, as well as the #1 show by broadway.com).

The day began with Isaac Cole Powell coming in to record his solo, “Some Girls,” followed by yours truly for “The Human Heart.” Everyone else then arrived to record all the other tracks, which include “We Dance,” “One Small Girl,” “Rain” and “Pray.”

In the middle of the afternoon, our Ti Moune, Hailey Kilgore, then began recording her solos (there are quite a few, and she would be staying longer than the rest of us). All the actors, powered by lots of snacks, salad and heaps of goodwill, maintained our stamina and spirit as one by one, we went through all our vocals.

After the singing was over, one of our cast members, Cassondra James, stayed behind until the end of the day to record her flute parts (yes, aside from singing, dancing and acting, she plays the flute in the show which makes her an official quadruple threat).

Because we had to do multiple takes of every song plus overdubs and punch-ins, our day was quite long and the amount we sang felt like the equivalent of doing the actual musical three to four times, but without the choreography.

Truth be told, it’s actually less painful doing the show itself, as standing for long hours takes it toll on our knees, legs and back. But no, we’re not complaining. Not every show gets a cast recording, so to have the opportunity to do one is such a blessing.

Head to onceonthisisland.com to pre-order your copy! The album will be released on Feb. 23, the day after my birthday. Happy birthday to me indeed!

As with every long-running show, it’s inevitable that eventually, cast members will leave, and new ones will come in to replace them. Sometimes the replacement is temporary, and at other times it’s permanent. On Jan. 8, we will be welcoming two brand-new “islanders” to sing and dance with us on the sandbox: Tony nominee Norm Lewis who will fill in for Quentin Earl Darrington as Agwe the god of water, and “American Idol” Season 1 alum Tamyra Gray who’ll step into the shoes of Papa Ge the demon of death, currently played by Merle Dandridge. 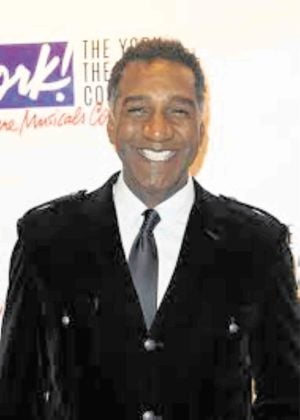 Norm and I have worked together previously on “Les Misérables” (both on Broadway and at the 25th anniversary celebration at the O2 Arena in London in 2010) and the “Ragtime” concert a few years later at Avery Fisher Hall in Lincoln Center.

This will mark our third foray on the boards together. He has done “Once on This Island” before (with Kenita Miller, our Mama Euralie, who played Ti Moune to his Agwe), so I’m hoping this will feel like riding a bike, but with a lot of extra vocal orchestrations, bells and whistles.

As for Tamyra, I remember watching that first season of “American Idol” intently, and latching onto her talent, beauty and charm. Since the season ended, she came to Broadway, playing Mimi in “Rent” (sweetly enough, along with Merle Dandridge who played Joanne).

To our newest cast members, welcome to our island!

My on-screen leading man Aga Muhlach along with his wife Charlene Gonzalez visited us on the island last Dec. 19, along with Rob and Nicole. Following the performance, we all headed to Gyu-Kaku for Japanese barbecue. Our lovely Filipino server Lexa looked like she was about to pass out from the sight of Aga. Well, that’s understandable; I mean, who wouldn’t?

Thank you so much for spending the evening with us, and we hope you both enjoyed the show!