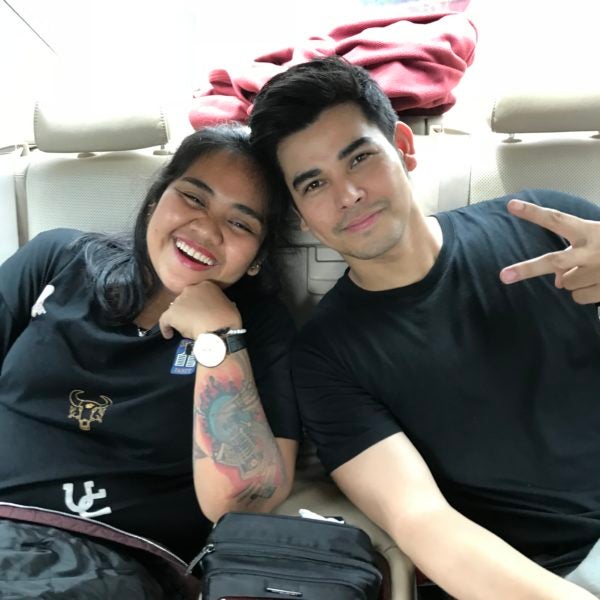 After signing up with Star Music for a recording deal in the Philippines, Leo Consul, the former Eat Bulaga Indonesia host, is now busy shooting his first-ever movie in Indonesia.

This isn’t just an ordinary movie though because he will be playing the lead role alongside Indonesian actress Nina Kozok.

The movie will be in Bahasa, a language which Leo speaks fluently. (Trivia: He also speaks fluent French and Ilocano and some Spanish.)

Although happy about this latest development in his career, Leo expressed disappointment that he couldn’t proceed with his planned homecoming concert in Bolinao, Pangasinan this year due to a conflict with his shooting schedule.

“It’s sad because I was really looking forward to it. We tried to fix the schedule but my management has decided to just do it early next year,” the Pangasinan-native said in a Facebook post addressing his followers.

Aside from the movie in Indonesia, Leo will also be releasing soon his debut single which is a cover of Yeng Constantino’s popular hit “Ikaw” (rendered in a mix of Filipino and Bahasa).

Famous in Indonesia after starring in soap operas, hosting a number of TV shows and penning two books, Leo is also set to conquer the local entertainment scene after two failed attempts.

He is now being managed by Boy Abunda under Asian Artists Agency. He recently appeared in a music video as Kim Chiu’s leading man for her song “Okay Na Ako” and is slated to do a round of TV guestings to promote his album.

Last month, INQUIRER.net had an exclusive interview with Leo in Jakarta. Here’s our conversation with him:

For those who don’t know yet, how did your career in Indonesia happen?

I started here as an English teacher where I taught for six months until I was discovered by BMG Indonesia. I signed a contract with them but they couldn’t provide the visa that I needed. I went home to the Philippines but something was calling me here.

It was in 2011 when I auditioned and got to be one of the hosts of Eat Bulaga Indonesia. It started everything for me. From then on, I got my own shows, my first ever teleserye, game shows… but it was really the teleserye that made me known here. Teleseryes are big here just like in the Philippines.

I know you joined a reality show back in the Philippines.

Yes, Starstruck 5, which was won by Aljur Abrenica. It was not my time yet, I guess. I also joined Pinoy Dream Academy but nothing happened as well.

You live alone here, right? Could you walk us through your daily life in Jakarta?

In the morning I go straight to work and then I go to the gym. If I don’t have work I mostly stay at home because I’m not a party person. I’ve been in Indonesia a long time already but I’ve never been to a club here. I don’t drink and smoke so I don’t see the point. So normally, I’m in the gym and at home, reading books.

And what do you do on your days off?

I travel to random places that I’ve never visited in Indonesia before. I just pack my bag and go. One time I took the train to Yogyakarta alone. Whenever I have 3-4 days without schedule, I go out of the country.

What do you miss most about the Philippines?

Food. Indonesian food is good but I miss our food in the Philippines.

How do you stay fit?

I make sure I work out every day. Weightlifting, cardio.

What is the biggest misconception about you?

That I’m a partygoer. Seriously, I’m an introvert. Whenever I would have to attend events, I can’t wait to go home, take off my clothes/costumes and just watch TV.

My family. It’s a struggle growing up in a very poor family. I told myself I’ll help them out in any way I can. That’s why I’m here in the entertainment industry, because it allows me to provide for them.

What else do you aspire for?

I really want to be a chef, maybe in a small restaurant somewhere in Europe. When I’m done in show biz, that’s really my dream.

Back home, did you really cook?

Yeah, I started cooking at the age of six when my mom left us to be a domestic helper in Malaysia. From then on, I was tasked to cook for the family. That’s how I learned.

You have a lot of admirers. How do you deal with them?

Well I am here because of them so I try to show them appreciation. They helped me to be where I am today.

You’ve gone through a lot and have come a long way already. What is your biggest realization so far?

You have to have a dream. You have to be scared. You have to feel that fear. When I was young, I had no answer whenever people would ask me what I wanted to be when I grow up. I’d tell myself: “We don’t have money, I’m not even sure if I can go to college. And then I realized, as I grew older, that I had to have a dream. Even if it doesn’t come true, at least I tried. And that’s what’s important.