Hugh Hefner’s children must remain sober to inherit his fortune 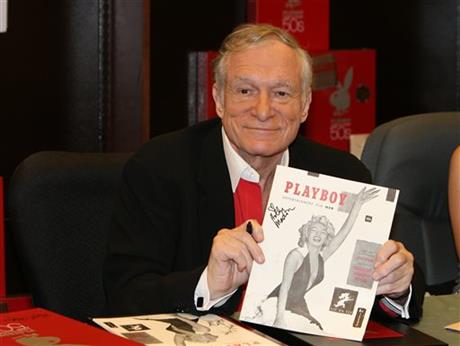 In this Nov. 15, 2007 photo, Hugh Hefner smiles while signing copies of the Playboy calendar and Playboy Cover to Cover: The 50s DVD box set in Los Angeles.

Hugh Hefner passed away last September, leaving not only his legacy behind but also a sizable fortune from his massive Playboy enterprise.

At the time of his death, the 91-year-old businessman was reportedly worth $43 million, mainly from revenues from his magazine, TV and film appearances, a website, nightclubs and Playboy’s own clothing line.

After leaving his second wife, Crystal Harris, out of the will, his fortune will be divided to his four children, Christie, David, Marston and Cooper.

READ: Hugh Hefner’s widow left out of will due to prenup agreement

But the inheritance comes with stipulation: the children must not take illegal drugs or become dependent on alcohol in order to access the money, according to legal documents obtained by Entertainment Tonight.

“Mandatory distributions to the beneficiary and the beneficiary’s withdrawal rights … will be suspended if:…the trustees reasonably believe that a beneficiary of any trust routinely or frequently uses or consumes any illegal substance so as to be physically or psychologically dependent upon that substance,” the lengthy document read.

For Harris to continue to be “taken care of,” she must also abide by the terms, the report said.

All the recipients will also be monitored by the family’s lawyers and subjected to drug tests if they are deemed to be using an illegal substance.

Those who will disobey will have their inheritance stripped off, and may only regain access to the entitlement after proving themselves to be sober again for 12 months.  Khristian Ibarrola /ra