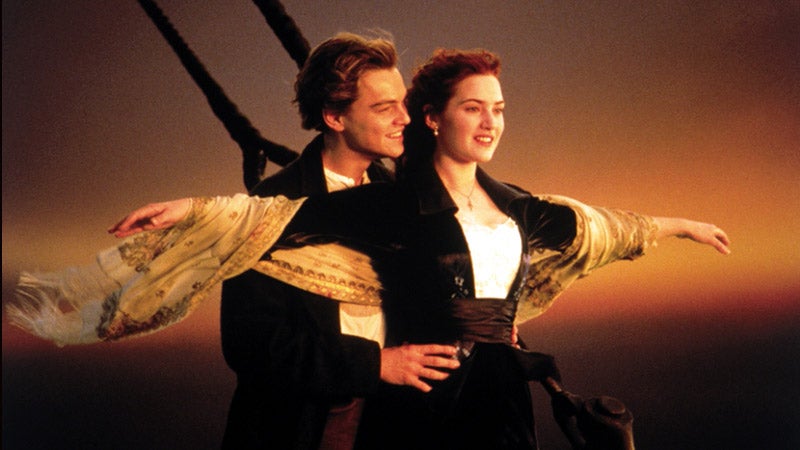 Tuesday marks two decades since Rose vowed to Jack she’d “never let go” — before spectacularly reneging on her promise, sending her frozen-to-death paramour to a watery grave and leaving “Titaniacs” worldwide sobbing into their popcorn.

The anniversary has been celebrated with screenings across the United States, and audiences are still swooning over the young lovers played by Leonardo DiCaprio and Kate Winslet — now both Oscar winners and Hollywood A-listers.

“The Titanic story itself has a timeless quality. It seems to exist outside our daily lives. As this straight moral lesson, it’s something that fascinates us,” director James Cameron told fans at a Los Angeles screening to mark the milestone.

Winslet’s love-struck socialite and DiCaprio’s artistic drifter were fictionalized characters in a dramatization of the real-life sinking in 1912 of history’s most famous ship after it hit an iceberg on its maiden voyage across the Atlantic.

The film, distributed by Paramount at home and Fox abroad, entered into movie history when it picked up 11 Oscars, including best picture and best director for Cameron.

With a worldwide gross of $2.2 billion, it was the most successful movie ever made until Cameron’s “Avatar” (2009) took $2.8 billion at the box office.

At an intimidating 195 minutes, the movie can feel in parts as long as the voyage on which it is based, but it earned mostly glowing reviews, and the theme song “My Heart Will Go On” became a global success for Celine Dion.

Cameron, 63, says he sold the idea to Fox executives with “probably the shortest pitch for a major movie in Hollywood history.”

“I whipped open this book and in the center is a beautiful double-truck spread right across both pages of a painting by Ken Marschall, the best artist of the subject of the Titanic,” he recalled.

“It was a beautiful shot of the rocket going off and lighting up the ship, and lifeboats rowing away as it went down in the more sedate, quiet part of the sinking. I said, ‘Romeo and Juliet on that.’ Five words.”

DiCaprio and Winslet — then 21 and 20, respectively — began filming in September 1996, their first scene together the moment in which the actress appears nude for him to paint.

The epic proportions of the $200 million production, with its 1,000 extras and crew of more than 800, can hardly be overstated.

Cameron had a full scale model of the ill-fated luxury liner constructed on 40 acres of Mexican waterfront bought by Fox, after receiving the blueprints from the original ship builder.

The rooms were meticulously recreated from old photographs, as was RMS Titanic’s first class staircase, mahogany woodwork and gold-plated light fixtures, all of which was destroyed in the sinking scene.

Such was the perceived folly of the bloated production — then the costliest ever — that Variety began a daily “Titanic Watch” column, ridiculing what was expected to be the biggest flop in Hollywood history.

A despondent Cameron kept a razor blade taped to the screen of his video editing equipment with an inscription written in pen: “Use in case film sucks.”

The movie test-screened to rapturous applause in Minneapolis, however, and Cameron was reassured that he’d actually made a decent movie.

It opened with a domestic haul of $28.6 million and was expected to follow the normal pattern for blockbusters, dropping by 40-50 percent in its second weekend.

Instead, it made another $28 million, and $32 million on the third weekend, eventually securing the top spot for 15 consecutive weeks.

“It just went down by like two percent a week and everybody just felt like we were in this alternate universe where the rules of gravity didn’t apply,” said Cameron.

Experts theorized that the numbers were being boosted by groups of young teenage girls watching multiple times, but Cameron believes “Titanic” did so well because the love story appealed across generations.

“With all due respect to Kate and Leo, and they’re both good friends of mine, it’s not Kate and Leo anymore — it’s Jack and Rose,” said Cameron.

“And it will always be Jack and Rose. I guess that’s what I’m proudest of, that we’ve created something that has its own reality, that’s outside of time, and theoretically that could still be enjoyed indefinitely.” /cbb