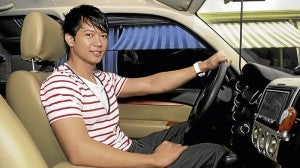 RONNIE saved up for his Ford Everest. by Arnold Almacen

“This entire area was covered with lahar in 1991,” he says of the streets, now lined with various trees and shrubs, that lead to his new house.

The Liangs’ old residence, just a few blocks from the new address, was completely devastated, he recalls: “We had to shovel ash that had piled up outside our house.”

He was only 6 years old, he recounts. “I was in Grade 1 and I remember it turned dark at noon and started raining ash—and stones.”

It felt like the end of the world, but such a tragic experience drove him to dream big.

In one of the exercises in PDA, headmaster Jim Paredes asked the contestants to create a visualization board with pictures culled from magazines.

On the board Ronnie pasted pictures of different places he wanted to visit (Washington DC, Chicago, San Francisco), along with things he wished to acquire (a car, CD and new house).

“My fellow contestants teased me—they said I was being too ambitious,” he recalls.

Five years later, Ronnie attained all those goals—including building a home for his parents.

PREPARING to share a meal with mom Adelina and dad Rogelio. Photo by Arnold Almacen

Ronnie remembers now that they didn’t have a sala set in the former house: “We couldn’t invite guests because we couldn’t offer them seats. Our walls were made of plywood. We didn’t have our own bedrooms. Also, the roof leaked when it rained.”

After winning (third place) in PDA and releasing an album (“Ang Aking Awitin,” Universal Records), he started saving up for the home and a vehicle (he bought a Ford Everest).

“I feel fulfilled, having given them this house. We prayed for this for a long time. Even now, my dreams are not for myself, but for my family,” says Ronnie, youngest of seven children.

The yellow cottage-type home, he explains, was inspired by the houses in Fontana Clark.

“Whenever we passed by, we would admire the villas in that subdivision where we knew only the rich could afford to live,” he says.

These days, he divides his time between a Quezon City condo and the family home in Pampanga.

“Every two weeks, I try to go home,” he says. “I spend the night, or two days, here.” Whenever he arrives home, the first to greet him is his pet chow, Ginger. “She seems to know the sound of my car and would run to the garage to meet me.”

DEVOTED pet chow Ginger is always at the door when he gets home. Photo by Arnold Almacen.

A dog lover, he has three of them in his bachelor’s pad in the city. “The Shih Tzu is named Jacob and the dachshunds, Kimberly and Max.”

When he’s home, he usually watches TV or relaxes in his bedroom, which is decorated with his portraits, all gifts from fans.

For their bonding time, he massages his mom’s feet. “She needs therapy for her arthritis,” he explains. Formerly a working student, Ronnie finished a degree in Education (major in General Sciences) from the Holy Angel University before show biz beckoned.

The cream leather sofa in the sala was reupholstered by his father Rogelio. “My dad has a small business, reupholstering car seats and sala sets.”

He built a small reupholstering workshop for his dad, adjacent to the house.

As in most Kapampangan homes, the Liangs’ kitchen and dining room are the most frequently used areas.

Ronnie knows how to cook—he was a devoted apprentice to his mom Adelina when he was a kid.

“She used to send me to the wet market to buy the ingredients,” he says.

PDA opened doors for him, he admits. It led to endorsement deals, for Sylpaul Joyce appliance store and his own eponymous, best-selling brand in Joel Cruz’s Aficionado perfume line.

He says PDA gave him the Suzuki motorbike parked in the garage as well.

Apart from the motorcycle, a house and lot (in a nearby subdivision) was part of his PDA prizes, too. “My sister and her family now live there,” he says. But more than anything else, he says, PDA taught him that dreams do come true.

His debut album was repackaged with a new CD that includes music videos and Pampango versions of his signature songs “Ngiti” (“Ayli”) and “Ikaw” (“Ika”).

“Now, I’m praying for a follow-up album, a teleserye, movie and, hopefully, records for release abroad.” Time to bring out the visualization board again.