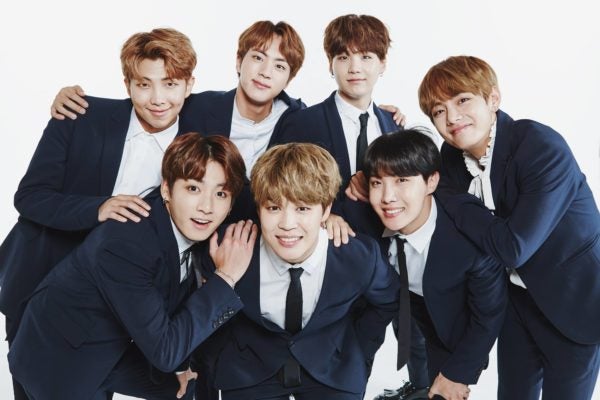 It seems K-pop fever is sparing no one, and has caught up even to Kris Aquino.

The Queen of All Media declared on Instagram that she was a fan of Billboard-topping Korean boy band BTS.

She admitted that she might even be the “oldest member” of the ARMY.

Fans call themselves ARMY or Adorable Representative M.C for Youth. It’s also a callback to what BTS stands for in Korean which is “bulletproof boy scouts.”

#btsarmy this is how it all started for me- binalik balikan ko this jacket online because i kept debating whether to buy or not- but practicality won- sobrang mahal talaga & i just couldn’t justify the purchase. Then came @bts.bighitofficial on the AMA awards & i saw my dream @gucci jacket! So i started watching their performance closely, 1st i got impressed by their moves- i can barely walk w/o tripping or falling & i can’t dance to save my soul. Then i realized ang gaganda ng boses nila! So after watching the AMA performance more than 10X, i watched them on Ellen & Jimmy Kimmel- then I bought their albums. After listening & reading the English translation (i’m a lyrics freak)- in no particular order i love Serendipity, Best of Me, Her, Love is Not Over, I Need U, Butterfly, Autumn Leaves, and Am I Wrong. P.S. Now listening to MAMA – this tribute to Moms is making me love them even more. “Because you gave selflessly to me, Because you were my support, Now you can believe in your son, you can smile…” How can i not love them? Proud member #btsarmy (question when will they perform in Tokyo, Bangkok, or Singapore? I’ll FLY to watch them!) ❤️💛💚💙💜🌈

Aquino said the group of seven caught her attention when she saw one of them wearing a Gucci jacket that she coveted during their performance at the American Music Awards.

It was a historic moment, as BTS is the first K-pop group to perform at the awards show.

Aside from their fashion, the 20-somethings’ talent won her over. “First I got impressed by their moves… then I realized ang gaganda ng boses nila!” (Their voices are so beautiful!)

She eventually bought their albums and named her favorite songs. “In no particular order I love ‘Serendipity’, ‘Best of Me’, ‘Her’, ‘Love is Not Over’, ‘I Need U’, ‘Butterfly’, ‘Autumn Leaves’, and ‘Am I Wrong’.”

The mom of two was also touched by their song “Mama” and looks forward to catching them on an Asian tour.

BTS has stood out as a K-pop group since the members write their own songs and discuss issues such as mental health.

They are also promoting a UNICEF campaign to end violence against children, which Aquino shared and noted, “Realizing now why I felt an instant connection.”

As for the jacket, she said that she has watched the AMAs video 20 times and is tempted to sell an Hermes bag to buy the sequined jacket worn by Jimin.

7 Things to Remember from BTS’ Wings Tour In Manila