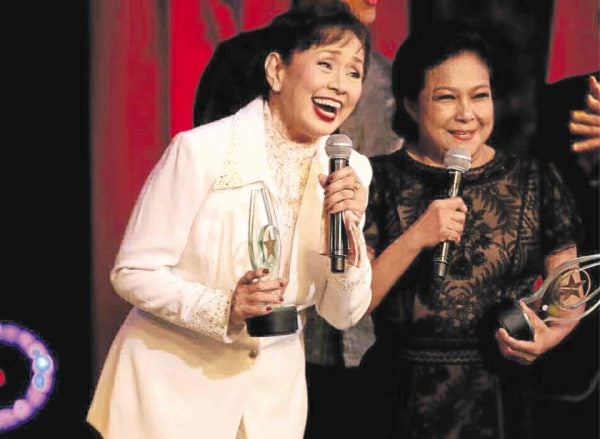 After our recent column on the country’s next TV-movie drama king came out, we were swamped by a flurry of reactions, observations and objections.

Readers variously batted for the inclusion of Dindo Fernando, the addition of younger “princes,” and expanding the criteria involved, to include popularity and profitability, because kings must be acclaimed by the populace. A right royal rejoinder!

Most instructively insistent of all was the “equal opportunity” call for a female version of the vetting process to also be conducted.

But, that’s easier said than done, because the competition is even fiercer when it comes to regal and royal “K” on the distaff side of the local cinematic equation.

In addition, senior actresses like Nora Aunor and Vilma Santos are still starring in quality films, making it more difficult for younger women to challenge their queenship.

Despite these additional challenges, we always aim to please, so let’s bite the bullet and fire away:

These female players have made it to our “longer” list, because we’ve seen them come up with focused and standout TV-film portrayals.

It’s noteworthy to see that some younger actresses like Bea and Angelica remain up for consideration, despite the vast experience of their more senior or “senioring” rivals.

This bodes well for the future of dramatic arts on film and TV in these parts—to be further bolstered when even younger actresses master the thespic challenge and turn in standout performances of their own.

For this decade, however, the short list of leading contenders can be further pared down to Vilma, Nora, Zsa Zsa, Charo, Bea, Alessandra, Cherie and Lorna—a strong and distinguished lineup for all thespic seasons and reasons!

The top and ultimate choice would depend on the new acting vehicles that these regal talents will come up with in 2018—that’s how tight the race has become.

A single thespic showcase and challenge that is clearly superior to the rest could prove to be the crown-clinching gambit. So, the acting aces we’ve cited should make doubly sure that their next thespic showcase is the best of the best—by far!