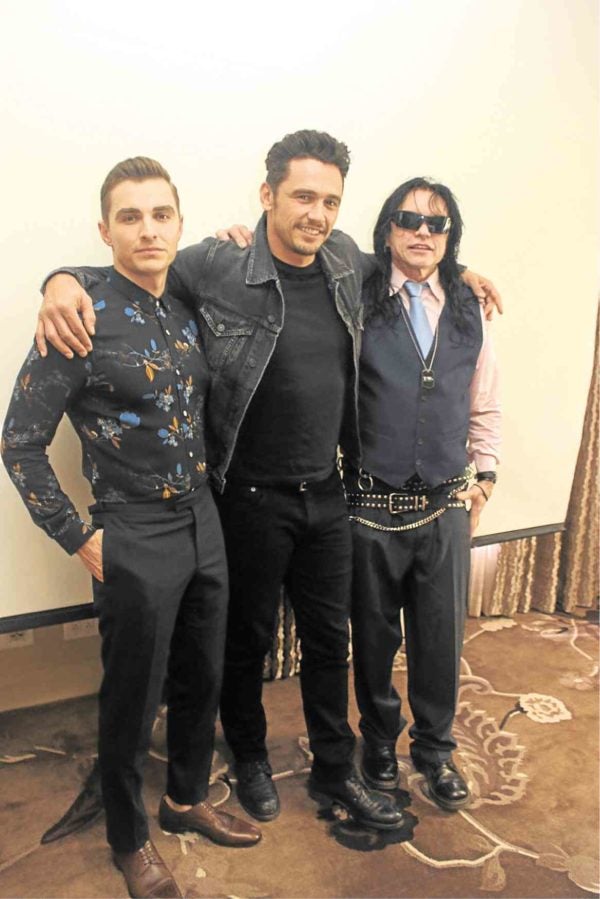 LOS ANGELES—The Franco brothers—James and Dave—shot “The Disaster Artist” (their first team-up), based on the book about the making of Tommy Wiseau’s “The Room,” widely considered as one of the worst movies ever made.

How bad was “The Room,” which Tommy produced, directed, starred in and released in 2003? It was so bad that it was so good. A flop when it was first released, “The Room” became a cult hit, drawing midnight screening audiences, who interacted with the film like moviegoers did with “The Rocky Horror Picture Show.” Followers delighted in the bad acting and dialogue. Eventually, Tommy recouped the $6 million he spent on “The Room.”

James directed the movie based on “The Disaster Artist,” a memoir written by Greg Sestero, who starred as Mark in “The Room,” with Tom Bissell. Greg shared his anecdotes about the making of the movie, often cited as the “Citizen Kane” of bad movies, which featured him in a melodramatic love triangle with Tommy (as Johnny) and Juliette Danielle (Lisa).

In James’ movie, which features impressive 25 minutes of shot-for-shot recreations of “The Room,” he plays Tommy, while Dave portrays Greg. The good news is that James does not deliver a disaster of a movie, but comes up with a hilarious, deliciously subversive film that makes you want to see Tommy’s “The Room.” The two brothers have great chemistry onscreen.

Recently, we interviewed James and Dave in separate chats. But the treat was meeting Tommy himself, whom we can only perfectly describe in Filipino as “jeproks”—long black hair, sporting sunglasses, dog tag, belts, wallet chain and other silver accessories. The eccentric man, whose age, heritage, past and the source of his considerable personal fortune is a mystery, has mastered the art of deflecting questions. He’s reportedly Polish and is in his 60s.

Here are James, Dave and Tommy in their own words:

There was that billboard on Highland Avenue (in LA) that was up there for five years from 2003 to 2008 that Tommy paid for, which was for hundreds of thousands of dollars. Then, he spent $6 million on the movie that looks like $60 (laughs).
The billboard was such a weird thing that I didn’t really think about it. It had a phone number and Tommy’s face glaring down at you.

And then I read the book. The other actor, Greg Sestero, and this great journalist Tom Bissell, wrote it. I’m glad I read the book first, because the movie “The Room” is so bizarre. People have been going for 14 years essentially to laugh at it.

It was a very personal, serious statement about how Tommy felt about the world and how it had betrayed him. The character commits suicide at the end.

With my film, you can see we aren’t really making fun of him as much as make him sympathetic and show that he has artistic tendencies.

Obviously, I love my brother. I was doing literary adaptations and I’d asked him to be in them. He just wasn’t interested.

Dave is seven years younger than I am, so by the time he came to LA to go to USC, I was established. I’d been on “Freaks and Geeks.” I’d won the Golden Globe for “James Dean.”

So I can understand him wanting to separate himself for a period of time and establish his own career. He had maybe a decade of that.

When I read the book, I knew that we had the right dynamic.

It was such a good experience working with him that we started a production company together. He’s the brother who loves to say no to things. He’s very discerning.
In the past, I was the guy who just loved to do more and more. So, we’re a good match.

What’s interesting about Tommy’s mysteries is that he holds onto this persona so tightly. To me, that’s fascinating. That’s the Norma Desmond kind of thing.

It’s almost, in a way, like my character Alien in “Spring Breakers.” For some reason, he needs to be viewed like an all-American guy, like James Dean.

In our everyday lives, outside of work, I like to believe I am more low-key than James. But, what we both realize is that he’s much more relaxed than me on set.

This is something that I have discovered about myself recently—that I am pretty type A when it comes to work. That’s because I’m a perfectionist to a fault.

In terms of James as a director, he’s a great actor’s director. He spends a lot of time in the casting process. Once he feels he has cast the right people in each role, he’s pretty hands-off.

He encourages actors to trust their instincts. He is very collaborative.

We (James and I) didn’t interact that much when we were growing up. But part of my love for movies came from him and my older brother, Tom. They introduced me to R-rated movies much earlier than I probably should have been watching them.

For a while, James was very involved in social media. He would put out photos of himself that were very provocative, where he was mostly nude for no reason (laughs). I stay away from social media for the most part. I am always surrounded by people I love and who love me.

So I don’t know why I would join social media and invite a lot of negative energy into my life on a daily basis. But, James has gotten rid of all his social media accounts. I think that makes him a lot happier.

Everyone expected me to make it in this business that is very difficult to make it in. So I felt that pressure.

It’s a very touchy topic. I am a very emotional person; I like drama and comedy. So, at the beginning of “The Room,” I personally thought it was a success for me, because I was very comfortable at that time in my life, money and all of that stuff. I was in a different place.

I got a roller-coaster ride because I thought everything would be hunky-dory and give people a job and, whoa, was I wrong with that one (laughs). But I think everything goes around.