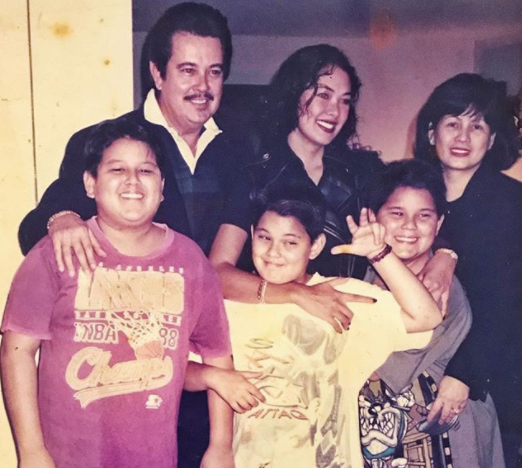 Actress Ruffa Gutierrez has given the public yet again another glimpse of her beautiful family through a throwback photo she recently posted on Instagram.

The Gutierrez family is famous for their beauty. Then and now, even as they age, they are simply the perfect example of ageless beauty. On Instagram, Ruffa took a trip back in memory lane and relieved the moments of her youth with a photo of her family including her father Eddie Gutierrez, mother Anabelle Rama and brothers Elvis, Richard and Raymond in Beverly Hills, California, USA. The year was 1995.

The Gutierrez family lived in the States for a while. But even before they left, the kids already had stellar careers in local showbiz. Ruffa was already a famous teen star while twins Richard and Raymond were adorable child actors.

Just a few days ago, Ruffa also posted a few more throwback entries. Reminiscing her beauty queen days, she posted a photo of herself “at the Backstage at the Araneta Coliseum during Bb. Pilipinas Coronation Night. 1993.”

In her caption, she introduced herself the way she did back in the day, “Hi, I’m Sharmaine Ruffa Gutierrez, 18 years old from Quezon City, Philippines!”

She also posted a photo of her and dear friend, actress Aiko Melendez during their teen days in the early ’90s. Both were Regal babies and completing their batch is actress Carmina Villaroel.

My BFF & Kumare @aikomelendez ❤️👯 : True friendship isn’t about being inseparable. It’s being separated & nothing changes. 💋Taken In 1993…24 years ago! 😳🙉 #throwback #SentiSabado : Swipe to the left for more pics ✨✨

Ruffa is now 43 and has two teenage girls. Richard, meanwhile, is expecting his second child with fiancée Sarah Lahbati.