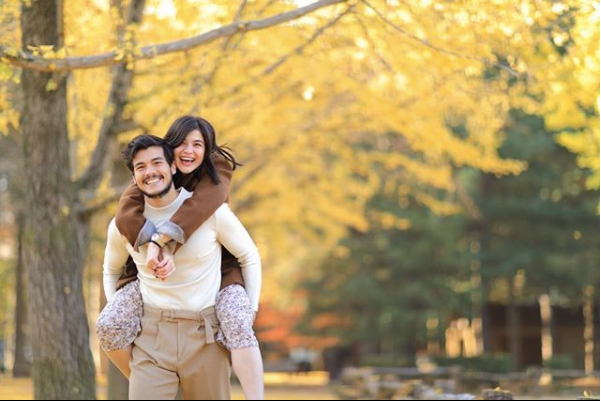 Erwan Heussaff and Anne Curtis during their stay in South Korea. Image: Instagram/@annecurtissmith

It appears that the entourage of Anne Curtis and Erwan Heussaff is now in New Zealand where the couple is rumored to be getting married this weekend.

Curtis’ friend and fellow It girl Isabelle Daza shared this photo on Instagram saying she was ready to go hiking.

Ready for all our hikes! ⛰

Daza’s husband, Adrien Semblat, took a shot of himself in front of a general merchandise store in the Cardrona hotel area.

Passing by the Cardona hotel area, established in 1863, one of New Zealand’s oldest hotel, some rare remaining buildings from this valley’s gold rush era!

Also expected to follow is model Georgina Wilson, who shared this photo of herself capturing her best swag while she was in Hong Kong for two days.

Girl Boss-ing has been hindering me from living my best instahoe life but found a second in my 48 hour HK trip to get my content on haha💥 NZ here we come!!😍

Heussaff’s brother-in-law Nico Bolzico had a blast riding horses with his wife, Solenn. “Before we met you were afraid of horses! Now you love them, [maybe] because I look like one?” Bolzico joked in his post.

Before we met you were afraid of horses! Now you love them, may be because I look like one? Spending quality time with Wifezilla after she had the busiest year! … Bebe, marring you is like a walk in the park … Jurassic Park! (This is not my quote!) #sosbolzNZ #happyNZing #notimeforlonghashtagsexceptforthisone

However, no photos of Curtis or Heussaff have surfaced in their respective social media accounts. The couple recently traveled to South Korea together and enjoyed the country’s autumn season.

The pair has been engaged since last year after dating for six years. No specific details about the wedding have been revealed by Curtis or Heussaff. /ra