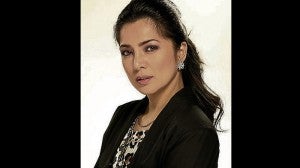 If not for show biz, New York-raised actress Alice Dixson revealed, she might have finished college in the United States and joined the military or the Peace Corps.

Alice, 42, who started her career by appearing in TV commercials and joining beauty pageants, said she was a member of the basketball and softball teams in Notre Dame Academy in Staten Island, New York, she was also into skateboarding and other outdoor sports.

“I wouldn’t say I was very smart, but I was very active, physically,” she told the Inquirer at her launch as endorser of a non-invasive slimming procedure, De-Butter Contouring.

Currently based in Canada, Alice said her appetite for rigorous work was revived five years ago. With little convincing from a neighbor and gym buddy, who’s a police officer, Alice started training to run the “eight-minute mile,” a requisite to pass tests for the jobs she was eyeing.

But she ended up in real estate, becoming a licensed realtor in Florida in 2007, and in British Columbia, Canada, in 2008.

She returned to show biz this year via TV5’s “Babaeng Hampaslupa” and the current drama series, “Glamorosa.”

When in Canada, Alice still does the 8-kilometer routine at least three times a week. Aside from the health benefits, she noted, running is the perfect bonding time with nature.

“Our place is 40 minutes away from Vancouver; it’s very quiet,” she said. “When I run, I hear the leaves rustling and twigs crackling. I drink from the streams.”

She and her husband of 12 years, Ronnie Miranda, are going strong even without children, she said. “We didn’t want kids right away. After a while, we realized that we were happy the way things are. But if I do get pregnant, I’ll welcome the baby with open arms.”