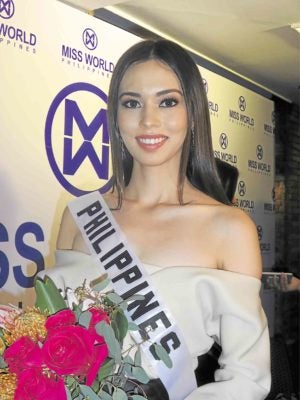 Miss World Philippines Laura Lehmann hopes to take advantage of her exposure to television work in her quest for the international crown.

Laura Lehmann, former courtside reporter of the University Athletic Association of the Philippines (UAAP) for ABS-CBN Sports+Action channel and host of the Lifestyle Network’s “Listed” program, is currently in China for the Miss World pageant, where she is up against over 100 international delegates.

“I’m used to doing interviews, I’m used to being on TV. In Miss World, when being judged, we’re being interviewed, also appearing on TV. So, it would be an advantage,” Laura told the Inquirer during their sendoff press conference at Annabel’s in Quezon City recently.

But aside from her TV work, Laura also has her pageant experience under her beaded belt.

Laura finished first runner up in the 2014 Binibining Pilipinas pageant, her first crack on the beauty-contest stage.

In the 2017 Miss World Philippines pageant, she topped the “Multimedia” challenge and was also in the Top 5 of the Top Model contest. She also received the Miss Cosmo Skin and Miss BYS Philippines titles.

Her educational background is impressive, too.

Laura was an academic scholar at the Assumption College and the Beacon International School of Manila. She also studied psychology, neurosciences and Spanish in the United States, before enrolling at the Ateneo de Manila University after her first pageant stint.

Laura said what attracted her to the Miss World pageant was its “Beauty with a Purpose” program.

And she hopes to take part in the international group’s global initiatives so she can be more involved in charity programs.

“I like what they do. I talked to Stephanie (del Valle, reigning Miss World from Puerto Rico) while she was here,” she said.

“They go all over the world and really reach out to charities. They’re with kids. And that’s the type of person that I am, that’s why I joined.”

The 67th Miss World pageant will culminate on Nov. 18.