Dennis bucks pressure to get hitched at 36 | Inquirer Entertainment

Dennis bucks pressure to get hitched at 36 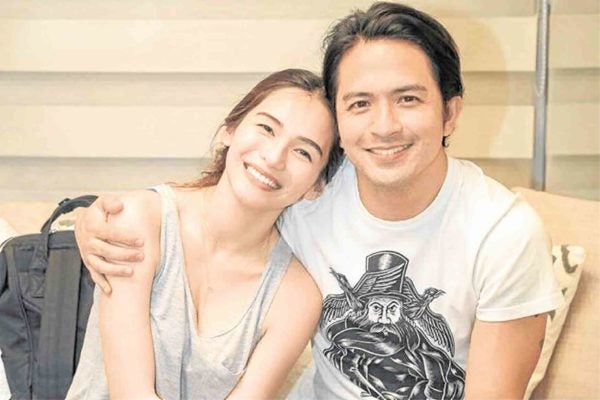 Seeing not a few of his friends tie the knot recently doesn’t make actor Dennis Trillo feel compelled to follow suit and propose marriage to his girlfriend, Jennylyn Mercado.

“I don’t think putting pressure on ourselves would do us any good,” he told reporters in a pocket interview for GMA 7’s coming romantic-comedy series, “The One That Got Away.” “Should we reach that point in our lives, it would be because both Jen and I wanted it—not because we forced it; not because it’s what has been happening around us.”

But while the show biz couple has no immediate plans of getting married—or engaged—Dennis said he sees Jennylyn as “the one.”

“We’re still together. That’s enough reason for me to say that she’s ‘it’ for me,” he said, adding that there’s no truth to rumors that he popped the question to Jennylyn in a recent trip to Paris, France.

“Wala. We just attended a wedding—not ours!” he quipped.

It’s Dennis and Jennylyn’s second shot at love. After ending their one-year relationship in 2011, the two began dating again in 2015. What’s different this time around?

“I would say that our relationship is calmer. We have also become more mature, which is why we now can handle our relationship better,” said the 36-year-old star, who stressed the importance of being open and sensitive to the feelings and needs of one’s partner.

“It’s crucial that we talk to each other; that we ask how our loved one is doing—is she happy?” he pointed out. “If you love someone, you support her in whatever it is that makes her happy; you help her achieve her goals in life.”

The last time Dennis and Jennylyn worked together was two years ago in the soap, “My Faithful Husband.” “That was memorable. Jen is a joy to work with; she’s a great actress. I would like to do a project with her again,” Dennis said.

In “The One That Got Away,” Dennis plays an entrepreneur who’s had relationships with the characters of Max Collins, Lovi Poe and Rhian Ramos. Asked if he thinks exes can remain friends after breaking up, Dennis said: “Personally, I would prefer it that way. I don’t think it’s good to throw away the friendship just because you separated.”

“And that’s not an issue for me. There’s nothing wrong if you and your ex are OK; that doesn’t necessarily mean that you have to be close, anyway,” he said. “It just means you parted ways on good terms.”

Dennis likewise related that he’s not the type who leaves the girl hanging when things turn sour.

“When you see that the relationship isn’t working anymore, you have to talk about it. Otherwise, you end up hating each other,” Dennis said. “Of course, you also hope that you leave happy memories.”