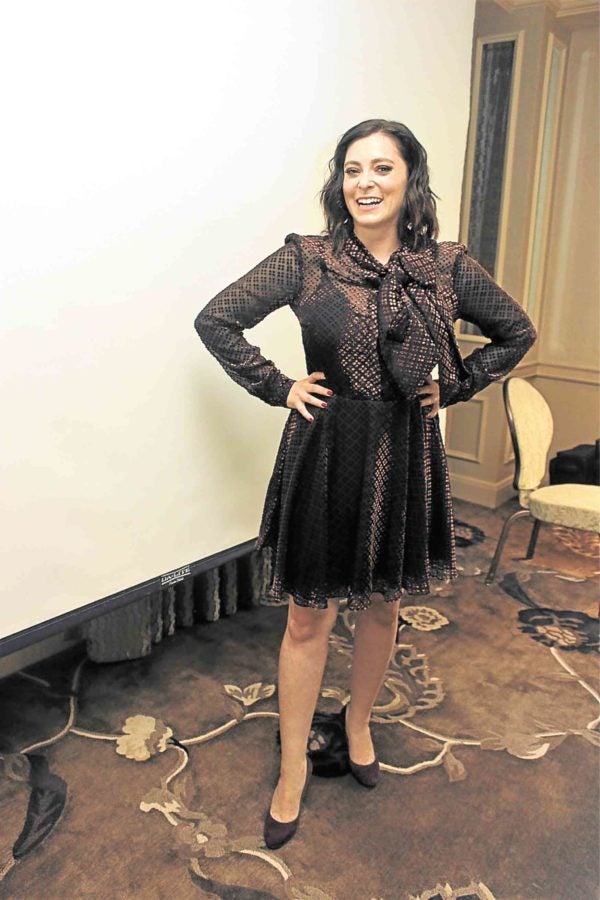 LOS ANGELES—Rachel Bloom’s Rebecca Bunch may have been jilted by her Filipino boyfriend, Josh Chan (Vincent Rodriguez III), in the TV series, “Crazy Ex-Girlfriend.” But Rachel’s appreciation of Filipino “bros” (“hot,” she said) and food is growing.

“I’m eating a lot more Filipino food,” said the cocreator (with Aline Brosh McKenna) of the show, which is acclaimed for its diversity, humor and musical numbers. While Rachel’s obsession, Josh, left her at the altar, and her theme in the new season is a woman scorned, out for revenge against the Filipino hunk, the show will still feature family who lives in that Pinoy suburban enclave, West Covina.

And Vincent, of course, who showed off his singing and dancing prowess … inside a church.

She continued, “I turned 30 this year. I’m a weirdo, so I had a guy bring a ton of lizards. But Vincent came to the party and brought a whole spread from LA Rose Café (a Fil-Am restaurant), which serves fantastic Filipino food.”

The Golden Globe-winning actress for her portrayal of Rebecca added, “Just the other day on the set, there was a scene with Josh and his parents. They were eating a ton of Filipino food, and I ate all the props. I will say, doing the show has made me love Filipino food, specifically.” You can say Rebecca not only has a taste for Pinoy men, but also for lumpia, adobo and pancit.

For this talented, articulate writer-actress who grew up in LA’s multiethnic South Bay, diversity is just is. “The thing that has always been fun for us doing on the show—and the thing that I loved about growing up in Southern California—was the diversity without even realizing it,” she explained. “When I went to school, the homecoming queen was Japanese and the homecoming king was Chinese. No one even said it was diverse; it just was. And that’s what America is.

“Our show just shows the actual demographics of this typical American town, especially as we get to the Southwest. So, it’s important to show it just because it’s the truth. What’s striking is the fact that our main love interest is Asian, that just is, because he is hot, awesome and just happens to be Filipino. So we’re portraying the truth … and that Filipino men are very hot.

“And that’s what we’re going for this season in general—finding the common truth and humanity in everyone. When we were thinking of the show, OK, will we want to have Rebecca be in love with a happy bro, and what a character we haven’t seen on television before? We were like, oh I’ve never seen an Asian bro on television, even though I grew up with a ton of them.” 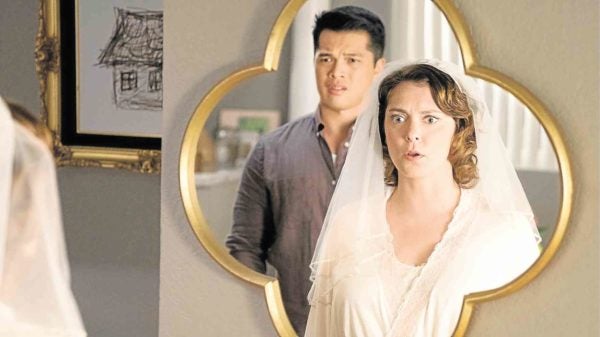 Rachel, who, along with Aline, were honored as Visionary awardees by East West Players (a pioneering Asian theater company in the US) for their show’s diversity, stressed, “That diversity for us has always meant, and continues to be, what feels new, fresh and interesting. We have more of Josh’s family this season. Amy Hill, who plays Lourdes—Josh’s mom—is fantastic. She actually gets a song this season. What’s important is just showing the reality that America is a nation of immigrants. That’s just what it is.”

She also spoke about the series’ other theme, mental health. “It’s a propulsive season because our show is about a person (Rebecca) who’s in a constantly evolving relationship with her mental health. That’s the love story of the show.

“Every scene has been a different story. That’s why we keep changing the theme song, because the theme song illustrates the different stories. So, Season 1 was, Josh just happens to be here, hence that manic theme we had. Season 2 was, I’m just a girl in love; I can’t be held responsible for my actions.

“This season, the story she’s telling herself keeps changing. So, when we start it off, she’s telling herself, I’m the sexy, hot, vampy woman scorned. Then, that falls away because that’s a lie she can’t tell herself anymore. We’re going to diagnose Rebecca and get much deeper into mental-health issues.”

“What type of revenge have I done?” she repeated aloud a question. “I’m afraid it’s quite boring. I feel like this character, because she’s more unhinged than I am, carries out a lot of revenge fantasies that I thought about and then stopped myself. I have a very active revenge fantasy life, but also because I’m such a people-pleaser in many ways. I don’t want to seem crazy.”

The frank actress pointed out, “That happens when you come from a family with mental illness.” She has spoken about her own battles with anxiety and depression. “You fear being crazy, even though you know you’re not. So that fear, of wanting to be seen as sane, always held me back from going full-revenge mode.”

As for delusions, she shared, “Honestly, I’m hard on myself. I had a conversation with my writing partner about this yesterday. I ended up bursting into tears. Because I’m on set for 17 hours sometimes, and I don’t get to be home a ton.

“That’s the biggest delusion I have—sometimes, telling myself you’re not doing well enough, you’re such a piece of garbage. You should never say that to yourself. The delusion I’m still fighting is, how to be kind to myself and to forgive myself.”

“I’ve gotten so much feedback that it’s amazing,” she said about viewers’ response to the show’s candor about mental health. “People come up to me and go, ‘Thank you, I’ve been on Prozac for 10 years.’ I’ve had people come up to me, ‘I’m bipolar. Thank you for making it OK to talk, making what isn’t ‘normal,’ normal.’”

“No, no one’s said that,” she replied when asked if she has been told to not talk too much about mental health.

After all, this is Hollywood, she was teased. “Exactly, we’re all on something,” she shot back with a smile.

The show employs a full writing staff, including Fil-Am Rene Gube, who also plays Father Brah, to come up with a weekly show. Rachel’s husband, Dan Gregor, also writes for the show.

One recent popular musical number seemed inspired by the villagers’ scene in “Beauty and the Beast.” The villagers, played by the cast regulars (all good), sang about a “Jewish chick who got dumped by the ripped Filipino.”

She said, “In the writers room, we are about 12 to 13, including Aline and myself. For the songwriters, there are three of us—me, Jack Dolgen, who also writes on the show, and Adam Schlesinger, who also produces the songs for the show.”

“It feels like writing a new show every season,” she gushed. “So that makes me really excited. And that’s definitely kept it really fresh.” And no doubt Rachel is energized by servings of lumpia and pancit.

Read Next
Local show biz predators prowl even lower depths
EDITORS' PICK
IATF to LGUs: Issue ordinances vs attacks on frontliners, COVID-19 patients
Diokno to Duterte: OK to make fun of buck tooth, but focus on people’s needs first
Robredo spox thanks Duterte for defending VP’s efforts vs COVID-19
Nograles: Cabinet members to donate 75% of monthly salary to aid COVID-19 fight
Quick chat with Nicole Andersson: ‘You really don’t need much to be happy’
10 Filipinos positive for COVID-19 in UK, 7 in Ireland — envoy
MOST READ
Coronavirus hotbed Rizal to shut borders on April 6
Gov’t mulling quarantine period extension of 15-20 more days
ADB warns PH against prolonged lockdown
Sotto on Isko Moreno’s call: We do our job without the media following our every move
Don't miss out on the latest news and information.