Woody Allen reveals he only gets $35 allowance every 2 weeks 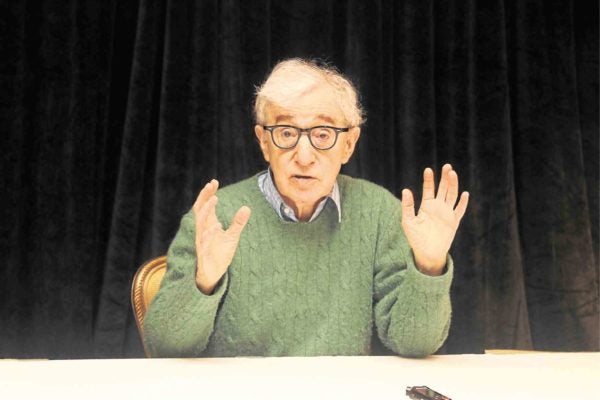 LOS ANGELES—One of the world’s greatest filmmakers only gets $35 allowance—not every week, but every two weeks—from his wife.

Woody Allen disclosed that—with glee, we should stress—when he gamely answered who’s the boss in his house. Is it him or his wife, Soon-Yi Previn?

“In my case, it’s unequivocally my wife,” began Woody, in one of his favorite attires—his frayed, old green sweater, checkered shirt, brown pants and shoes—at The Ritz-Carlton New York, Central Park. Needless to say, our talk was peppered with constant laughter, in reaction to this cinematic genius’ witty quips.

The only somber moment came when we discussed the Harvey Weinstein sexual allegations.

“My wife has a very domineering, strong personality,” the quintessential New Yorker said. “She’s hypercompetent and I’m hyperincompetent. I can’t work the television set without calling her into the room. So, she clearly handles the money and runs the house.

“I get a small allowance, $35, every couple of weeks. I have in my pocket now what’s left of it. She’s the one who calls all the shots—and I’m fine with that.”

We couldn’t get over the fact that we get more allowance than this legendary auteur whose latest film, “Wonder Wheel,” stars Kate Winslet, Justin Timberlake, Jim Belushi and Juno Temple (all very good). Well, by five dollars. We get 20 dollars a week, at least—not every two weeks.

Does he spend his allowance on the Yankees, of which he’s a fan? “I can’t afford the Yankees on my allowance,” Woody replied. He smiled as he said, “What I do with my allowance is, I leave my pants on the stool in the bathroom. I notice that my kids, on the way to school, occasionally come and take a five or a 10 (dollar bill). It gives me a thrill that they’re taking it.

We got curious about how his home looks like, as a result. Is it filled with whatever he collects?

“I’m not a collector at all,” came the quick answer. “I have no mementos of my work. There are no pictures of me with Kate Winslet or anyone. I don’t have programs from the theater or still shots from my movies. I just feel that once a movie is over, it’s gone.”

Woody stressed, “It’s not that I deliberately don’t have them. I was never interested in them. There are no traces (of my work). Someone once came over to my house, doing an interview with me and said, ‘You would never know what he did. It’s like the home of a literate lawyer.

“I don’t have DVDs of my movies. I wouldn’t know how to play them anyhow. In the library, there’s probably a copy of one or two of my books. It’s from apathy. I don’t look at my films, so I don’t need them. I don’t read my books, certainly.

“I’m giving my best shot all the time and if the public enjoys my film, I am thrilled. If they don’t, there’s nothing I can do.

“They have asked me at times to go on panels with Diane Keaton and Tony Roberts, where they would show ‘Annie Hall,’ and we would discuss it. I didn’t go because I don’t like living in the past all the time. You’re always talking about a film [made] 50 years ago and telling anecdotes about it.”

This Manhattanite who moonlights as a jazz clarinetist shared, “Another person writing about an interview with me wrote this sentence, ‘There are no great Woody Allen stories.’ I’m just not into any of that. I am interested in the Knicks, the Yankees, my clarinet, kids, wife…”

We begged to disagree about there being no great Woody Allen stories, of course. With his quotable answers and asides, Woody can inspire a thousand and one stories.

“And also, that I am a workaholic. They think all I do is work, but I don’t. I spend a lot of time fiddling with my clarinet, watching sports on television and taking walks with my wife. If anything, I’d say I’m lazy.”

For a lazy man, this 81-year-old has been prolific. He averages one new film each year. Last year, in addition to the film, “Café Society,” he also cranked out his first-ever TV series, “Crisis in Six Scenes.”

“Wonder Wheel,” his film this year, is an engrossing drama set in Coney Island in the 1950s that evokes the world of Blanche DuBois and Tennessee Williams.

Kate plays Ginny, a waitress who was once an actress; Justin is Mickey, a lifeguard who aspires to be a playwright; Jim is Ginny’s husband, Humpty, whom she resents; and Juno is Humpty’s daughter who’s being hunted by the mob.

Woody emphasized that “Wonder Wheel” isn’t his paean to Williams or “A Streetcar Named Desire.” “No, because I never do homage,” he asserted. “But everything I write, if it isn’t comedy, always has some ties to Tennessee Williams and Eugene O’Neill. I see that all the time cropping up in my work.

“They say that the writer is every character in the story. I am a protective father, and I have a loving relationship with my two daughters. I can see myself as Justin’s character because I’m a writer who’d like to write like (August) Strindberg or O’Neill, but can’t.

“I can see myself as Kate’s character, always thinking that the next love affair or thing will turn my life around magically. But it doesn’t. Soon-Yi and I married 20 years ago. These have been the best 20 years of my life because of that. But I am all of those characters, for sure.”